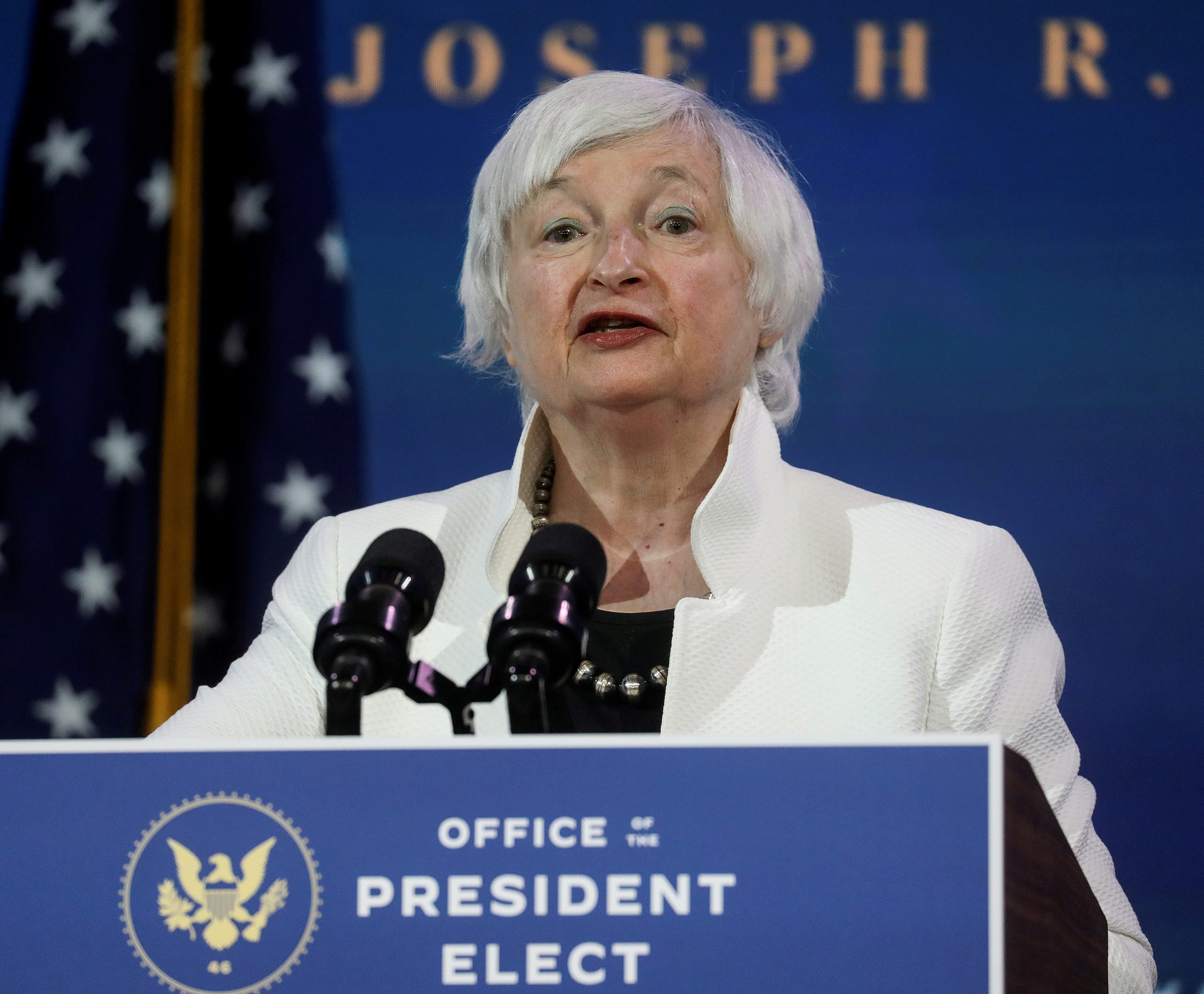 NOMINEE. Janet Yellen speaks as US President-elect Joe Biden announces nominees and appointees to serve on his economic policy team at his transition headquarters in Wilmington, Delaware, December 1, 2020.

Treasury Secretary nominee Janet Yellen‘s unequivocal support for a pandemic rescue plan cuts both ways for investors, fueling optimism that the rally in risk assets will continue while bolstering concerns over a massive run-up in government debt.

In her Senate confirmation hearing on Tuesday, January 19, the former Federal Reserve chair urged lawmakers to “act big” on the next coronavirus relief package after President-elect Joe Biden last week outlined a $1.9-trillion stimulus proposal as part of a domestic policy agenda heavy on government spending.

While the plan is expected to provide a critical boost for the coronavirus-hit economy, investors said the massive stimulus also could widen already huge deficits and drive up bond yields, while feeding a rally that some worry has already inflated bubbles in various assets. Other aspects of Biden’s plan, such as increased taxes on corporations and the wealthy, have also received a mixed reception.

“Obviously, she feels the economy needs this assistance and it’s a question of convincing the Senate,” said Peter Cardillo, chief market economist at Spartan Capital Securities. “I believe they’ll pass it, we’ll see another big package and that’s a short-term positive but a long-term negative.”

Since Democrats won control of the Senate earlier this month, setting the stage for greater stimulus, the S&P 500 has climbed about 2%, with particular strength in banks, small caps, and other stocks expected to perform well in an improving economy.

Yellen alluded to some of the market’s longer-term concerns in Tuesday’s testimony, during which she urged lawmakers to boost spending now, and pay down debt later.

“The long-term fiscal trajectory is a cause for concern. It is something we will look into…. But it is also important for America to invest,” Yellen told the Senate. “It is important to remember that we are in a very low interest rate environment.”

Yellen also said she agreed that President Donald Trump’s 2017 corporate tax cut had improved the competitiveness of American businesses, and that Biden was not proposing raising corporate taxes to the pre-2017 level. But she said it was also important that corporations and wealthy individuals pay their fair share.

“As Treasury secretary, she does have a pretty progressive agenda that she is hoping to sell,” said Jack Ablin, chief investment officer at Cresset Capital Management.

“I do think she has to walk a fine line between presenting herself as a level-headed policy maker, but at the same time embrace President-elect Biden’s pretty sweeping fiscal plans.”

As the head of the Fed and the vice chair before that, Yellen presided at the central bank over a period of low interest rates as the economy emerged from the financial crisis. In a move that could undermine any criticism of her as being too dovish on policy, she was at the Fed’s helm when it made the controversial decision in December 2015 to lift rates from zero.

After President Donald Trump frequently called for a weaker dollar to boost US exports, Yellen on Tuesday addressed the Treasury’s stance on the greenback, saying the value of the dollar and other currencies should be determined by markets and that the United States should oppose attempts by other countries to artificially manipulate currency values to gain trade advantage.

Win Thin, global head of currency strategy at BBH, said in a note that Yellen’s currency commentary was part of an effort “meant to signal a broad shift in policy from the outgoing Trump administration.”

“If nothing else, markets will no longer be subject to tweet-related volatility and that’s a good thing,” he said. – Rappler.com