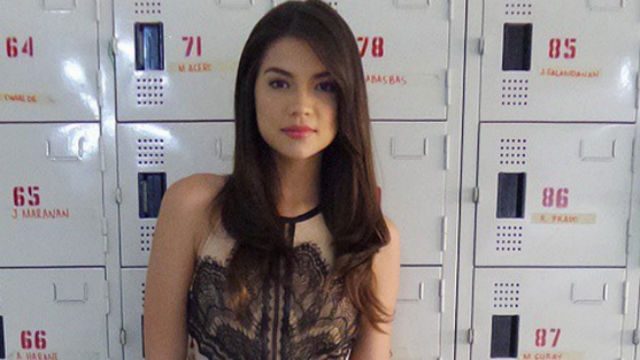 MANILA, Philippines – Actress Rhian Ramos said that she has learned so much from her past relationships with Mo Twister and KC Montero, before dating her current boyfriend Jason Choachuy.

In an interview aired on TV5’s Showbiz Konek na Konek with Bianca King Tuesday, July 21, Rhian described her time with Mo after their separation as  heartbreaking saying she felt she was not herself at that time. However, she managed to get herself back on track.

“[It taught me] like managing my time and just growing in many things. And you know, not just burying myself in one world,” Rhian said of the relationship which made headlines in 2011.

As for KC, Rhian said he will always be special to her.

“I really don’t know if I would be who I am today if it weren’t for KC. Even until now, when I talk about him, I really have nothing but good things to say. And until now I love him very dearly as a friend,” Rhian said.

Mo and Rhian’s relationship made headlines when a video of Mo leaked in 2011. In the video, an emotional Mo gave details about Rhian being “forced” to give up their baby for the sake of her career.

In 2011, Rhian filed a Temporary Restraining Order (TRO) against Mo. Rhian through her lawyer Lorna Kapunan, also filed charges against Mo in violating Republic Act 9262 or the Anti-Violence Against Women and Their Children Act of 2004. The issue is now closed.(READ: Rhian Ramos on Mo Twister and new relationship)

Following her relationship with Mo, Rhian dated KC for one year and 7 months before deciding to part in 2013. In an interview with Pep, Rhian described their separation as a friendly breakup.

As for her new boyfriend Jason, Rhian said she’s happy he’s very supportive of her work and vice versa.

“[I think] that we are so proud of each other I guess. he also treats me with so much respect. He takes very good care of me,” Rhian said. (READ: Rhian Ramos on non-showbiz boyfriend: ‘He’s one of my great motivators’

The two have been dating for more than 6 months.

On the topic of her current show The Rich Man’s Daughter, where she plays a lesbian, Rhian said she did not expect the positive feedback the show has been getting especially her tandem with co-star Glaiza de Castro.

“When I said yes to the show, I didn’t really foresee I was going to be a voice for anyone even. I just jumped into it. I really felt it was the right thing to do even if I was just really really scared and unprepared,” Rhian said.

She took the opportunity to thank everyone for the success of the show. Rhian replaced actress Marian Rivera after the announcement of her pregnancy.

“First of all thank you for accepting me, even if this role was not originally mine. When I heard about it, it’s about time, it’s time for this story for this kind of story to be told. I don’t really understand why anyone doesn’t touch it,” she said.

Rhian also shared that many of the fans dub the show in different languages for international viewers.

Aside from The Rich Man’s Daughter, Rhian is also set to launch her blog, which will focus on Philippine fashion. She is also preparing for a new show Full Throttle, which will air on the History channel. She will co-host the show with Sam YG.

“It’s a motoring show. We’re going to be playing with new kinds of vehicles especially cars. S’yempre enjoy na enjoy ako. (Of course I’m enjoying it.) It doesn’t feel like work . It’s going to be aired on History channel, the first Filipino show in the History channel,” she said.

Ful Throttle is scheduled to air in August. – Rappler.com