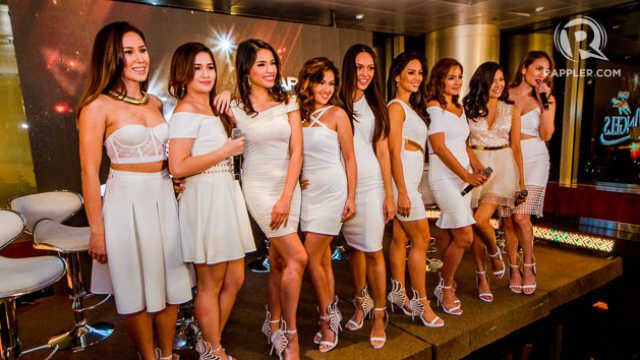 Facebook Twitter Copy URL
Copied
On its 23rd anniversary, Star Magic launches 9 new artists
MANILA, Philippines – To celebrate its 23rd year, Star Magic recently launched a new set of ladies during a press conference at the ABS-CBN compound. The Star Magic Angels were formally introduced last Sunday, July 26 on ASAP 20. These girls are no strangers to the spotlight, as many of the come from Pinoy Big Brother or the pageant scene.
Get to know the talented and diverse group of ladies before they hit your screens – here are the Star Magic Angels: Aiko , 25, tried out for Pinoy Big Brother in the past, but didn’t make it. Instead, she became one of the star dancers on Wowowee and today appears on the gag show Banana Split.
Franchesca Floirendo Franchesca, 20, has a degree in fine arts and interior design. She also loves fashion, just like superstar relatives Isabelle Daza and Georgina Wilson. Before entering showbiz, Franchesca entered the I am Meg contest and Miss Manila 2015.
Hanna Ledesma Hanna is popular in the pageant scene, as she was contestant #5 in Binibining Pilipinas 2014. She also used to work in IT, but is now trying her hand at showbiz. She was part of a band and even plays the electric guitar.
Jed Montero Jed has been part of a number of shows and events, such as Bingo Million, Shakey’s V-League, Philippine Super Liga, and Wowowee. Jed was also a former member of the University of the Philippines volleyball team.
Karen Reyes Karen initially made a name for herself on Pinoy Big Brother Teens Edition. She hopes to work with John Lloyd Cruz, her dream leading man.
Loren Burgos Raised in the US, Loren joined the police academy while she was still in high school. The former beauty queen has already made appearances in many TV shows, including Home Sweetie Home and Wansapanataym. She was also part of the movie Mulat, starring Jake Cuenca.
Myrtle Sarrosa Myrtle, 20 was also on Pinoy Big Brother Teens Edition, and was known as the “Cosplay Cutie ng Iloilo.” She was declared the winner of the season. Today, she is a host for the National Collegiate Athletic Association and an official Anime Jock on Hero TV.  She has also appeared in an issue of FHM Magazine and walked at the recent FHM’s 100 event. Myrtle was recently in the headlines after she admitted that she and Senator Grace Poe’s son Brian Llamanzares broke up.
Shey Bustamante Shey, 22, entered showbiz through Pinoy Big Brother, and has a passion for song writing and making music. For her, good music should have good lyrics, since she finds that it’s the words that get to her, more than the melody.
Yana Asistio The daughter of actress Nadia Montenegro, Yana is not new to showbiz. She has appeared in And I Love You So and Be Careful With My Heart. Today, she is a Culinary Arts student and specializes in Italian dishes.  – Rappler.com
All photos by Rob Reyes/Rappler