WATCH: The 5 best Battle Rounds from ‘The Voice Kids Philippines 2’ 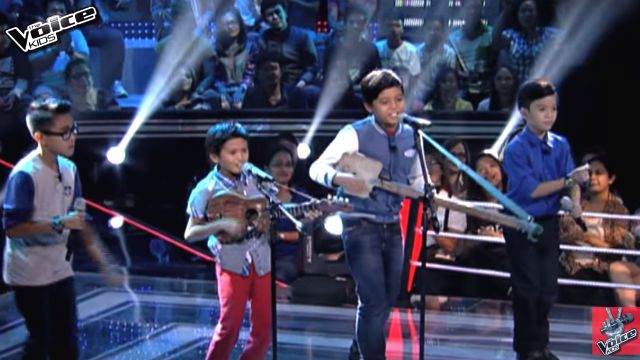 MANILA, Philippines – The Battle Rounds on The Voice Kids Philippines 2 are over and it’s time to head to the Sing-Offs, where the competition becomes much more intense as it continues to approach the live shows.

This time in the Sing-Offs, each coach will have to eliminate 4 kids from his or her top 6, leaving two to progress to the live shows.

Let’s take a look at some of the memorable Battle Rounds that came before:

It was one of the show’s more emotional moments as a tearful Sarah Geronimo chose between 3 stellar singers: fierce, strong Mandy, technically excellent and adorable Kristel, and emotionally connected, sweet Kenshley.

In the end, Kristel’s vocal control (watch her nail that high note at the 3:06 mark) and overall soaring performance earned her the deciding vote from Sarah G. This is the performance that pulls Kristel firmly into the spotlight – stiff competition for the other contestants and the other shining stars also on Sarah’s team.

There’s no question that all the singers who have made it this far are very skilled. But what else makes a great Battle? It’s one where the talents work together instead of against each other, alternately giving way and taking the spotlight. The 3 little ladies did just that, earning them praise from all 3 judges.

Three very able singers took on the classic “Your Love,” giving the song a more innocent, pure feel, and all 3 worked together to control the song’s tone – never over-singing or exaggerating.

One of the best features of The Voice Kids shows here and around the world is that the judges, understanding that these children are still in the earliest parts of their careers, go the extra mile to mentor the contestants. So when Visayan brothers Emman and Sandy expressed difficulty performing the English lines to their Battle song “Billionaire,” Bamboo and the team worked to put a whole new spin to the song.

The result: a fresh take on the Bruno Mars staple, and renewed confidence from Emman and Sandy, allowing all 4 singers to perform evenly. Altair was through to the next round, but all 4 can be proud to have delived the evening’s most memorable Battle.

This battle must have been a tough one for Coach Lea, who had to choose between Jonnalyn, with her sparkling charm, composed, confident Aihna, and cute powerhouse Dodong. But the number itself featured a tightly paced arrangement that showed off not only the kids’ vocal skills, but also their individual personalities.

Age-appropriate and so fun it was contagious, the number as a whole was one of the season’s best Battles.

Known as a tough coach with exacting standards in any competition (whether it’s The Voice or The Voice Kids), Lea showed audiences everywhere just how great the young singers could be especially when given a little extra push.

Each of the 3 singers here battled her own challenge when it came to the song, “For The First Time In Forever” from Frozen, which featured a complex arrangement and tongue-twister lyrics. Eventually, Jhyleanne pulled through after hitting a note that she had earlier worried about.

The Sing-Offs, the next round following the Battles, will drastically cut each coach’s team from 6 down to two. It’s absolutely critical for each singer to showcase his best possible overall performance. There’s no discounting the X-factor as well – a connection to the show’s viewers, who will soon be voting for their favored contestant in the coming weeks.

Who’s your pick to make it all the way to the end? Let us know in the comments below. – Rappler.com

Wyatt is the Lifestyle and Entertainment editor of Rappler