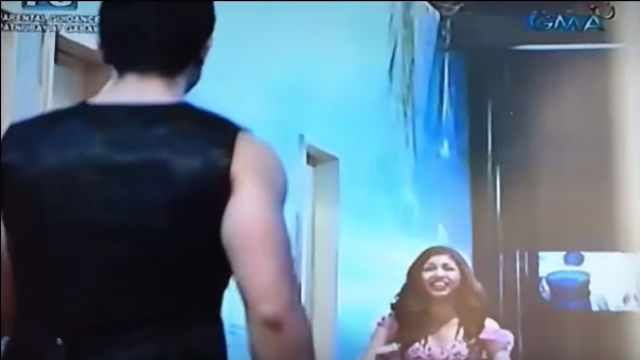 MANILA, Philippines – To many fans’ disappointment, AlDub almost met each other on Eat Bulaga’s “Bulaga Pa More” on Saturday, September 5, but it seems there are just too many obstacles in the way of the lovers. (READ: #AlDub: The fun tandem of Alden Richards and ‘Yaya Dub’)

The AlDub fever is still high two months after Alden Richards and Yaya Dub first waved at each other on Eat Bulaga’s “Juan for All, All for Juan” segment. The characters Yaya Dub (Maine Mendoza) and Alden only see each other through TV screens, but slowly began to fall for each other. Fans are looking forward to the day the two will finally meet, but Lola Nidora, for whom Yaya works, is against the couple being together.

The tandem’s last close encounter was in August, the last time Yaya competed in “Bulaga Pa More.” That time, Yaya had to rush off, after her Lola Nidora threatened to turn her into a giant pumpkin. (READ: #AlDub: Yaya Dub and Alden’s ‘Cinderella’ moment)

AlDub almost met again on Saturday, though. Here’s what happened:

Fans cheered on September 2, after Lola Nidora (Wally Bayola) agreed for Yaya Dub to enter the wildcard edition of the “Bulaga Pa More” segment, where Yaya and Alden were set to face each other in competition. While both Alden and Yaya were surprised by the idea, both wished each other luck. (READ: #AlDub, the story so far: Alden and Yaya Dub’s forbidden love)

Lola Nidora agreed for Yaya to compete on the following conditions: that the Rogelios (Nidora’s body guards) will be part of Yaya’s performance, that Yaya and Alden will not see each other during the competition, and that whoever wins the wildcard competition will donate the money to a less fortunate family in one of the segment’s future episodes.

On Saturday, Lola Nidora once again reminded the two about their promises. Alden was the first to perform, opening his act by introducing himself by his real name, Richard Faulkerson Jr, and saying: “Kapag pinaghirapan at pinagsikapan ang isang bagay, makukuha mo ‘yan sa tamang panahon.” (If you work hard for something, you will get it at the right time.)

One of Lola Nidora’s constant refrains regarding the couple’s forbidden love is that everything comes at the right time.

Unknown to Alden, Lola Nidora was observing him. After his performance, Lola Nidora approached him and even said Yaya was at backstage and could take his chance to see her. However, Alden pinkie swore that he wouldn’t see Yaya.

Yaya Dub performed next with the Rogelios and even showcased her drum skills. Meanwhile, Alden was confused about whether he should take his chance to meet Yaya Dub before she disappeared. After Yaya’s performance, it was obvious that she was looking for him. She ran backstage only to miss Alden, who ran onstage. It took about 4 more rounds of back and forth before the two finally faced each other backstage.

Yaya was clearly overjoyed when she saw Alden, and the two greeted each other with their famous pabebe wave.

But Lola Nidora once again got in the way of them meeting, as she put a barrier between them. Both were in tears.

“Papaano pa ako magtitiwala sa iyo kung sa simpleng pangako hindi mo pa matupad,” Lola Nidora told them, saying she was disappointed the two did not keep their promise. (How can I trust you both if you cannot keep a simple promise.)

Lola reminded the two that trust was more important than money, and said that they both destroyed her trust.

Things took a turn for the worst when two unidentified men took Yaya Dub. Lola Nidora called for the Rogelios, but they were busy taking selfies with the hosts of the show. After the barrier was removed, Alden tried to save Yaya, but it was too late – Yaya was gone.

After the episode, Maine posted a mesage for Alden on Twitter.

It was nice seeing you…. so nice. I am very glad. - Maine #ALDUBBATTLEForACause

Even Maine’s parents cried during the episode.

Will Alden ever see Yaya Dub again? Who are the men who kidnapped Yaya? Share your thoughts about the AlDub story in the comments section. – Rappler.com