In an interview with host IC Mendoza on Showbiz Konek na Konek, Didith said she really wished the fans of Enrique and partner Liza Soberano would stop criticizing her daughter.

(She’s confused. She’s very hurt, she’s sad. It’s painful for her what’s happening. I’m very sad for her because she said, ‘Mama I’m not even known. I said ‘Jessy, you have your own name and they have their own name, so it’s okay.)

(‘They won’t believe me because I’m not famous like them.’ Don’t do that to my kid, because she really worked hard for where she is right now. Whether my daughter is well known or not, she’s still my Jessy and she’s being harassed.)

In the end, Didith gave a message to Jessy saying that they have been through ups and downs but that she will always be there for her, and that Jessy should stay strong and show people that she’s a fighter.

Jessy posted an Instagram photo on September 10, saying in the caption that “the truth will always come out.” Many think that this post is in reference to Enrique’s actions on a flight from Manila to London.

The truth will always come out no matter how you lie about it. You know what you did, so don't try to squeeze yourself out by fabricating stories. Even trying to ruin other people's relationship with your twisted mind. Someone heard and saw what you did. What goes around comes back around brother.

Enrique allegedly harassed Jessy while drunk on the flight and only stopped when actor Luis Manzano stepped in.

The 3 flew to London with the rest of the ASAP 20 cast for the “ASAP Live in London” show.

Some of the comments on Jessy’s post said that she was overreacting and that she wanted attention.

Didith commented on the post on September 11, telling the bashers to stop. “It was not settled in London and you better stop now. There might be consequences for you bashing Jessy. Maaalanganin. Kaya stop na kayo. (So you all should stop.)”

When the bashers continued, Didith warned them to stop or she’d file a case for cyber bullying. “Si Jessy pa ang ‘di (is the one who is not) nice, ay iha, what is wrong ba with you? She is nice to the highest level. ‘Wag ka na magsalita (Don’t speak anymore), okay na. Baka mauwi pa sa hindi maganda ng dahil sa inyo. (This might not end nicely because of you.) So now, I am warning you. You stop na.” 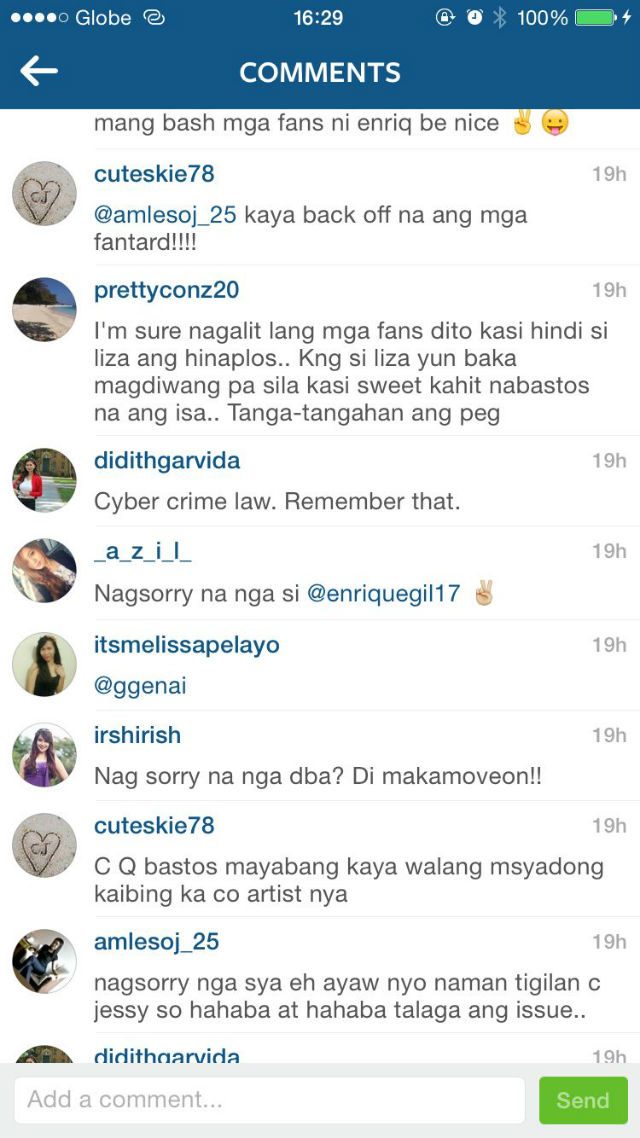 “Actually, yes she can file a case. So you stop it. Right here, right now,” wrote Didith in the comments of Jessy’s picture. Because the bashers would not stop, Didith said that she would file a case against Enrique for harassment.

“For your information, I will file a case against Enrique Gil soon. Because you are not stopping, will let your idol take the consequences of your action, is that what you want? We will make a thorough investigation into this para talagang lumabas ang pinaka-totoong nangyari kasi masyado kayong mapilit!! (so that the truth about what happened will come out because you’re all so forceful!) “Keep commenting this is one of the evidence why we want to file. Keep doing it. 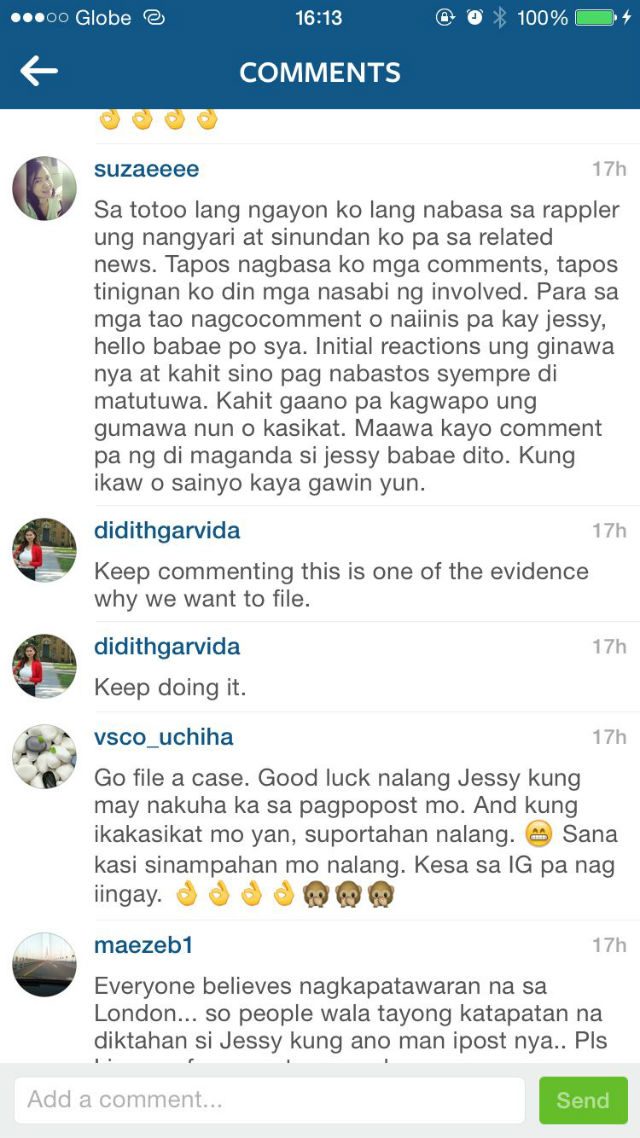 “Your idol supposedly harassed her and you are harassing her. Evidently, violation against women. Okay, fair enough. One more time you stop and I stop. “I don’t know you all but I guess you guys want it this way, we will give it your way,” she said. “Alam mo ba ang sinabi ni Enrique sa airline kay Jessy? (Do you know what Enrique said to Jessy on the airline?) If I were you, stop provoking me. I will be [a] child like you because you all want to be treated like one. Those words were said and have done harm. So now I’ve said my piece. You are right, I cannot control you, because you love your idol so much. But I love my daughter more. This is what your mother will feel when something happens like this; to your daughter in the future and the daughter of your daughter. “At kayong nakikisakay, oo magkakaanak din kayo in the future (And for those of you who are just riding along, yes, you will have kids in the future too), so think about that, your right as a woman is being violated, fight for it. You are all my daughters and I will fight for… that is how we think. “So, when you bash me or you bash Jessy… you bash your sister, your mother, your grandmother and all the women whom you truly love. I hope now you understand,” said Didith. Didith also defended her daughter saying, “She doesn’t care about popularity. She just wants to work. That all she wants. That is all we want, right? To work with dignity. For you to bash her is a very humbling experience she has to take in the sea of people and in the jungle of show business.” 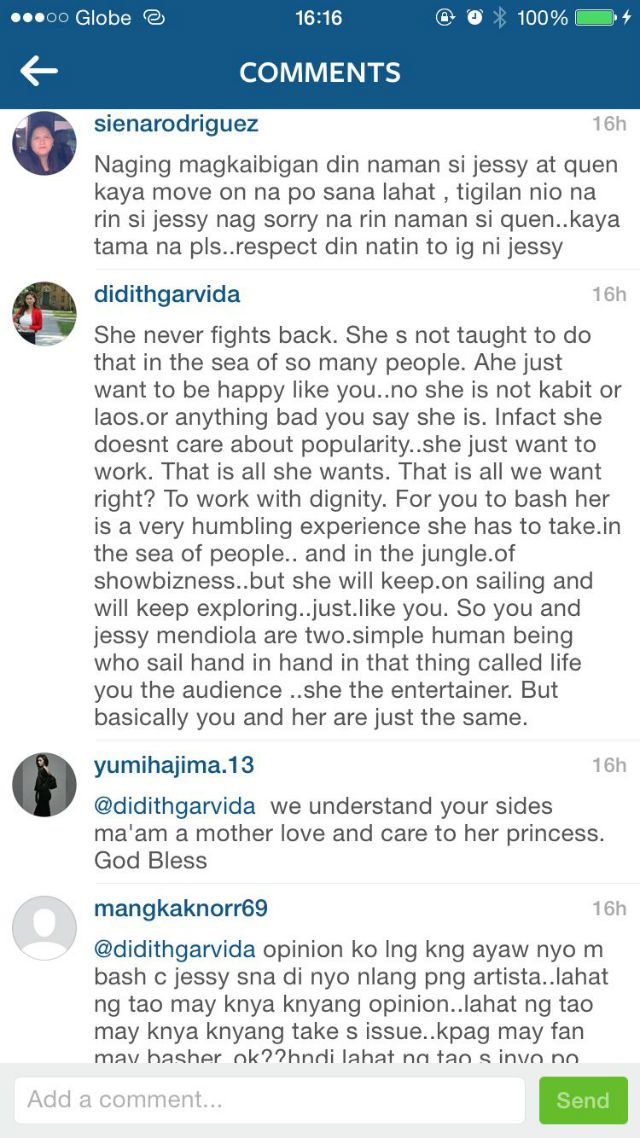 On September 11, Enrique admitted to having alcohol on the flight and apologized to Jessy and her boyfriend JM de Guzman for his actions.

A statement from Luis’ manager, June Rufino, was released saying that Enrique apologized in person to those involved as well. – Rappler.com