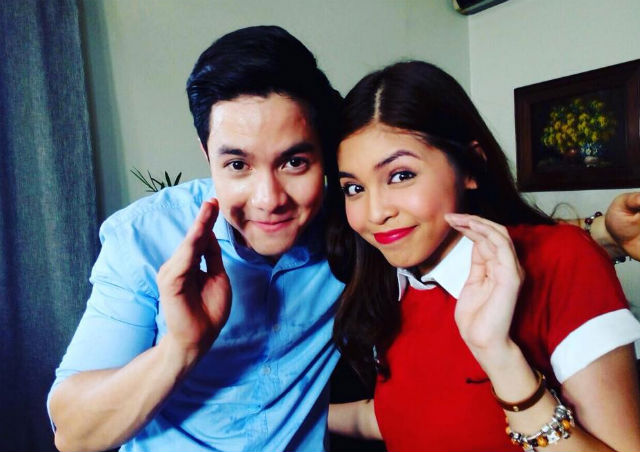 The AlDub tandem was born out of Eat Bulaga’s “Juan For All, All For Juan” segment, where the characters Alden and Yaya Dub are in love, but kept apart by Yaya’s boss, Lola Nidora. The characters have only ever seen each other in person three times. (#AlDub: That time Yaya Dub and Alden almost met face-to-face)

The two meet at the mansion with Alden giving flowers to Yaya, Lola Nidora and sisters Tinidora and Tidora. However, it seems there’s trouble once again. Here’s what happened:

After recovering from a minor accident after their date last week, Yaya Dub is doing well. Lola Nidora has also recovered from her sickness. At one point, a voice is heard calling out Lola’s name and Nidora and Tidora find Yaya unconscious.

While Yaya is recovering, she calls Lola Nidora to tell her she is craving for fruits. Alden immediately brings her two baskets of fruits along with cake and flowers.

On Wednesday, September 23, Alden asks what Yaya would like after she recovers. She tells him she is craving for lumpia and he tries, but he cannot find fresh lumpia. Yaya is disappointed but he promises her he will bring it next time.

On Thursday, September 24, a grumpy Yaya arrives with Lola Nidora at their destination. Tinidora and Tidora try to cheer her up with different types of lumpia but she doesn’t want any of it. Yaya refuses to talk to Alden at one point until a riding tandem comes with the fresh lumpia on hand. She later smiles and says thank you.

Lola Nidora announces big news. Using cupcakes to spell the word MANSION, Lola Nidora expresses that she is finally allowing Alden to court Yaya Dub at the mansion, much to their excitement. But once again, there are 3 conditions. The two must not touch each other, Alden must bring chicharon (pork rinds) for Lola, and Alden must sing the song “God Gave Me You,” which  became the couple’s love song.

Both start preparing for the visit with tips from their other co-hosts in the show, such as bringing food, flowers and other offerings.

Saturday, September 26 arrives – the day Alden can finally go to the mansion. He is given an address by one of Lola Nidora’s bodyguards, Rogelio. Before that, he performs the song “God Gave Me You,” dedicating it to Meng, Yaya Dub’s nickname.

“Mga Dabarkads, kung napupuna niyo po, palagi akong nagpapasalamat. Pero ‘tong kantang ‘to, gusto ko muna ialay kay Meng,” he says. (To the Dabarkads, if you always wonder, I say thank you. But this song, I dedicate to Meng.)

He also seeks permission from the hosts – Tito, Vic and Joey before going to the mansion. Vic even gives him his handkerchief, which he knows Alden will need.

Meanwhile, Yaya tries on different outfits and gets her makeup done.

Nidora makes sure that the mansion is very clean and that the food is perfect, asking her helper Rihanna to finalize everything.

After some trouble on the road, Alden finally arrives at the mansion.

Tidora and Tinidora meet Alden and give him a tour. He also gives the flowers and even waits for the signal to be seated.  Lola Nidora finally comes, and Alden seeks her blessing. He presents her with flowers and chicharon.

Yaya Dub finally comes down. At one point, he cannot even look her straight in the eye.

While they sit next to each other, Lola Nidora once again reminds them they should be one foot apart.

The two exchange sweet moments with each other and Tinidora and Tidora at one point push Alden towards Yaya to get closer.

They later join the Lolas for merienda. They also have some photos taken. Lola Nidora meanwhile excuses herself to take a phone call and leaves. Alden and Yaya take the opportunity to talk and eat, with Alden serving her food. There are many instances where they make close contact, but they make sure to stick to their promise.

At one point, Alden and Maine are serving cake to each other. Yaya begins to choke and Alden offers her water, and the two make contact.

Rihanna later appears and asks Alden for a selfie. Alden and Yaya also have their first selfie together.

Lola Nidora later appears and hints that she’s going to take a nap. Alden says he’s leaving, but before that, Yaya gives him a letter with the name “Richard” written on it. Alden’s real name is Richard Faulkerson Jr.

After Alden leaves, Tinidora and Tidora tease Yaya who later says, “This must be love.” However, Lola Nidora can be heard shouting Alden’s name.

To support the episode and the kalyeserye, Eat Bulaga also declared Saturday as National Pabebe Wave Day. As of 6:30pm, the hashtag #AlDubEBForLove has generated over 25 million tweets.  – Rappler.com