MANILA, Philippines – A film reviewer has called out the Metro Manila Film Festival (MMFF) for allegedly copying the logo of the Tribeca Film Festival.

In a Facebook post, Jonell Estillore posted screenshots showing the two designs: the original design of the New York-based film festival, and a similar design from the MMFF with “Metro Manila” set in a different typeface.

As of Monday evening, September 28, the website http://www.metromanilafilmfestival.com was on “maintenance mode” and could not be accessed.

Estillore told Rappler that he noticed the similarity on Sunday, September 27, and saw a post on the MMFF’s Facebook page saying the website was already available.

“I then checked right away and saw that the site was up and that they have a post in their Facebook page saying that their website is now available. Come morning, as my post had already drawn hundred of likes and shares, I checked the site again only to find it ‘under maintenance,'” Estillore said.

Estillore also posted screenshots of his Facebook conversation with a certain Gigi Mallillin of the MMFF Secretariat. 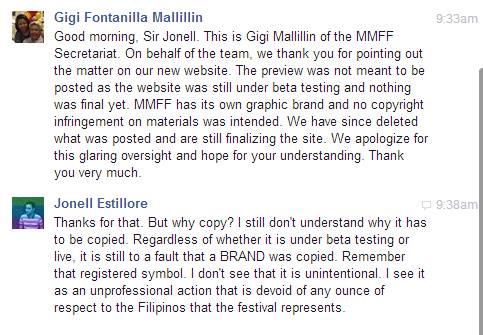 In her message, Mallillin said the design was a “preview” that was not meant to be posted online “as the website was still under beta testing and nothing was final yet.”

“MMFF has its own graphic brand and no copyright infringement on materials was intended. We have since deleted what was posted and are still finalizing the site. We apologize for this glaring oversight and hope for your understanding,” Mallillin wrote.

Estillore, however, questioned why there was a need to copy the design in the first place.

Mallillin responded by saying that none of the materials was meant to be posted, and that it was a “momentary lapse of judgment.”

“We cannot reiterate enough that MMFF already has an official logo and we are not changing any of it or the brand,” she added.

Estillore said he has already emailed the organizers of the Tribeca Film Festival regarding the issue.

The MMFF, which is held annually during the Christmas season, is supervised by members of the film industry and an executive committee headed by the chairman of the Metropolitan Manila Development Authority (MMDA).

Rappler tried to contact MMDA for comment, but the agency has yet to issue a response. – Rappler.com