Why Richard Gomez is running for mayor of Ormoc MANILA, Philippines – Richard Gomez confirmed he will run for mayor in Ormoc City next year.

In an interview during the press conference for the new family drama You’re My Home, Wednesday, October 21, Richard said he initially was not going to run, but made a last minute decision in order to help his wife. Rep. Lucy Torres-Gomez.

(There were complications…our opponent suddenly has the courage to run as husband and wife. In Ormoc, in Lucy’s district, it has the biggest voting population. No one wants to run for mayor so I said it cannot be that no will run in Ormoc. So I stood up and I took the challenge. It cannot be also that Lucy does not have an ally in Ormoc.)

Richard said he and his family had a long dicussion before he decided to file his certificate of candidacy.

(It was a big decision on my part to that because there are so many sacrifices that I’ll make. My work in the movies and TV will definitely be sacrificed. In fact, all through out before the filing, I was firm that I will not file, I will not run.)

(I feel sad because the work in showbiz will be lessened. But at the same time, you’ll never know what will happen if I win as mayor in Ormoc. One day, I make sure all of you [the press] will go there. We will do so many things there.)

Richard also believes that running for a government position will give him the chance to implement changes in the province.

Richard is one of the many celebrities running in the 2016 national and local elections. He previously ran for mayor of Ormoc but did not win. He also tried to run for a seat at the House of Representatives back in 2010 but was disqualified because he didn’t fulfill the one-year residency requirement. His wife, Lucy, took over his spot. (READ: Celebrities running, supporting candidates in the 2016 national elections)

‘You’re My Home’ and daughter Julianna

Before the election campaign starts, Richard teams up once again with Dawn Zulueta in the new family drama You’re My Home. The two reunited in the 2012 drama Walang Hanggan and recently starred in the movie The Love Affair. (READ: ‘The Love Affair’ Review: Spineless infidelity)

In You’re My Home, he plays Gabriel Fontanilla, a lawyer who handles the frustrated homicide case against Christian Vergara (JC de Vera). Gabriel’s life changes forever when his youngest son goes missing and his family shatters before him. 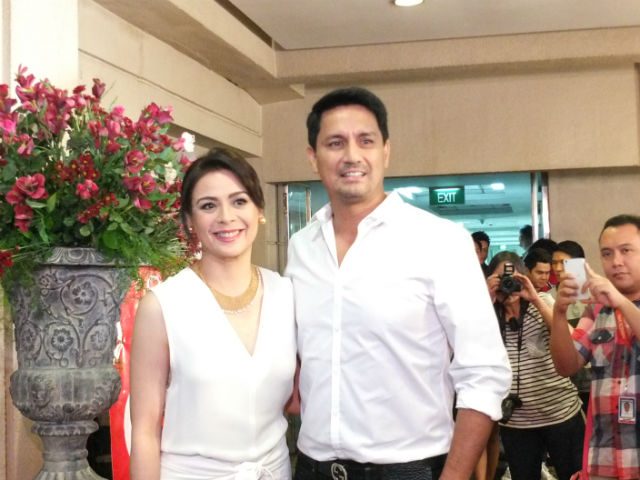 Richard said that he and Dawn always have always had fun working together since they started in the ’90s. The two dated in the past and remained friends to this day.

(Dawn and I have a good working relationship. When there a project that is being offered to us, we both talk about it. We just don’t accept a project for the sake of it. We really study it, like will this be a good project for our tandem? Will this have a lasting impact? Will it make an impression? Those kinds of considerations, like will it be commercially viable? There are so many factors.)

Richard also shared that he is now more involved in daughter Julianna’s life, now that she is 15 years old. According to Richard, Julianna is used to his commitments in showbiz and even watches his shows when she can.

“She enjoys watching us. Ito alam niya trabaho ito (She knows this is work) and she grew up in this kind of environment, so my daughter understands this fully kung ano ginagawa [ko]. (what I do),” he said.

“I have to be protective of Julianna. I have to be careful as well na hindi ko siya masyadong sasakalin (that I am not restricting her). I give her her freedom. I always tell her if she has to be with her classmates, bring them home, because it’s very important for me na makilala ko yung mga friends niya (to meet her friends.) It’s important for parents to know kung sino kasama ng mga anak nila (who their children are with),” he said. – Rappler.com