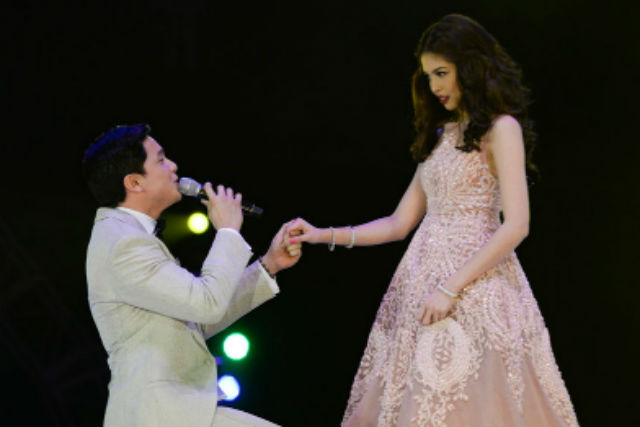 MANILA, Philippines (3rd UPDATE) – AlDub, the perennial Twitter trending topic, has done it again, generating 41 million tweets with their hashtag #AlDubEBTamangPanahon, according to a release from Twitter Monday, October 26.

This breaks their previous record of over 26 million tweets generated for their first date episode last September.

And according to Twitter, it also breaks another record previously set by the World Cup’s Germany versus Brazil match in 2014, which pulled in 35.6 million tweets.

These 41 million tweets were pulled in beginning late evening of October 23 until the morning of Sunday, October 25.

Twitter says that the hashtag #ALDubEBTamangPanahon hit 3 peaks. The highest occured when Alden Richards sang “God Gave Me You” to Yaya Dub; this pulled in more than 48,000 tweets per minute at 2:29 pm on October 24. AlDub later shared a fierce hug onstage in front of their legions of fans and devoted viewers.

This was the most shared tweet, from Maine Mendoza, the actress who plays Yaya Dub:

38 million! So much love 🙂 #ALDubEBTamangPanahon

Eat Bulaga co-host Joey de Leon also tweeted that the fans were able to post 25.8 million tweets in 24 hours, breaking another of their previous records.

Happy Birthday @piaguanio ! We set a new attendance and twitter record for Tamang Panahon at the Philippine Arena!

Happy 36th Anniversary to Eat Bulaga Happy 36 Million Tweets to ALL OF US! #ALDubEBTamangPanahon pic.twitter.com/Rpk74qSUbu

AlDub nation, the love team’s fans, as well as viewers of the popular kalyeserye took to Twitter to express joy, exhilaration, and kilig (giddy feelings) at  being able to finally see Alden and Yaya Dub be together at last, with the blessing and approval of Yaya’s guardian Lola Nidora.

The tweets started really pouring in earlier in the morning and the evening before the show even started, as anticipation rose to a fever pitch.

They continued streaming in as fans reacted to the show’s many highlights on social media, including Lola Nidora’s musings on love and a look at her suitors.

And then of course, there was the main event: the climactic meeting between Alden and Yaya Dub, which came after a touching group hug with Lola Nidora.

Ever since the kalyeserye began airing in July, fans have been cheering the tandem on and making it trend everyday. Early in October, Twitter Asia Pacific and Middle East Vice President Rishi Jaitly called AlDub a “global phenomenon,” after the hashtag #AlDubEBforLove pulled in 26 million tweets. (#AlDub: 7 Lessons from the success of the ‘global phenomenon’)

Thousands and thousands of fans flocked to the Philippine Arena to witness the event in person at the sold-out show. The Arena has a seating capacity of a little over 50,000. – Rappler.com