#AlDubNewBeginnings: Catching up with AlDub after ‘Tamang Panahon’ 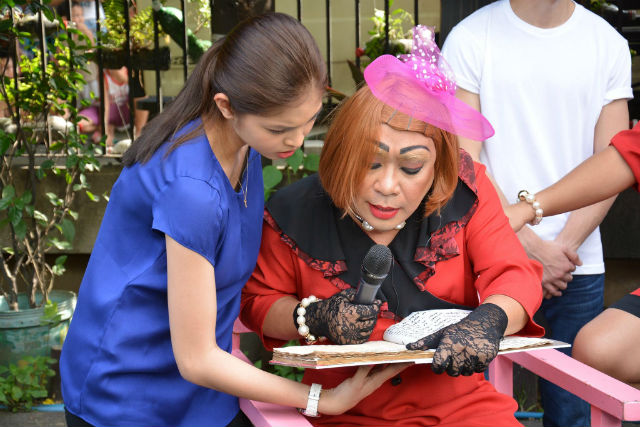 The Tamang Panahon meeting, which had Alden and Yaya Dub finally being able to hold each other after a long and heavily guarded courtship, recorded 41 million tweets for the duration of conversation tracked via the hashtag. This broke the Twitter record of the World Cup’s Germany versus Brazil match in 2014, which pulled in 35.6 million tweets.

But what happens after the happy ending?

New details continue to be revealed. Here’s what happened on the Monday episode, the first “AlDub” episode since Saturday’s “Tamang Panahon” show.

Lola Tidora and Tinidora admitted that they still had hangovers from Saturday’s event. They also thanked the whole AlDub Nation for coming and raising money for a good cause.

Enter Yaya Dub. When Alden’s face was flashed on screen, Yaya and Alden started Dubsmashing, only to be reminded by Tidora that they could already speak to each other. The lolas asked Alden to repeat what he said to Yaya that fateful day.

Yaya Dub also repeated her speech to him, thanking him for becoming part of her life.

Yaya then said: “May himala, totoong may himala.Si Alden ay isa himala na nasa puso ko at nasa puso natin lahat!” (There is a miracle, a real miracle. Alden is a miracle that’s in my heart and in everyone’s hearts.)

Alden said: “This must be love!”

Lola Nidora finally arrived at the barangay after she informed Tidora on the phone that she forgot something at the Philippine Arena. Alden thanked Lola Nidora, saying he now understands everything and that he will continue to prove that he is worthy of her trust.

(I want to thank you for all the lessons you’ve given me. Lola, I now understand everything, why you asked me to do those [tasks] and why you had to do this to Maine and me. And I promise, whatever happens, whatever you make me do, I will do my best to prove to you that you were right to trust me.)

Nidora also thanked Alden and then showed the stolen diary to everyone. Nidora had lost the diary earlier in the series, but recovered it later in the “Tamang Panahon” event.

However, she was upset as many of the pages were missing. She said that the diary contains many secrets, one of them, an entry from their late mother.

Lola Nidora opened the diary and read an entry written by their mother in 1938. It said that their mother met a fortune teller in Paris. The fortune teller told their mother of her future – that she will be blessed with 3 daughters (Nidora, Tidora, Tinidora) and will adopt another child (Isadora, Yaya Dub’s grandmother). The entry also revealed that the granddaughter of Isadora (Yaya Dub) will play a big part in the sisters’ lives but will go through many trials in her quest for love.

The entry also revealed that the sisters will meet a young man, who was fair skinned, tall and with dimples (referring to Alden) who will serve as the granddaughter’s special someone.

The diary also revealed a date – October 31, 2015, Saturday. On that date, everyone, including Alden, will have to go to a big house where they’re set to try and understand the true meaning of love.

Meanwhile, Vic Sotto’s son Vico made a cameo appearance, with Tinidora teasing him about Yaya Dub. Alden meanwhile tried to hold back his laughter, despite being teased that he was jealous. The episode ended with Nidora about to reveal the location of the house.

This is the 1st 6 sec after he saw @VicoSotto classic face Mr. @aldenrichards02 affected much? #ALDUBNewBeginnings pic.twitter.com/iViH4vaAZZ

What new adventure awaits the characters of the kalyeserye? Everyone will have to wait for Saturday, October 31.

What do you think of Monday’s episode? What challenges await Yaya Dub and Alden? Let the theories loose in the comments section below. – Rappler.com