MANILA, Philippines – “Trick or treat!” Heneral Luna star John Arcilla greeted his fellow cast and crew-members at the Heneral Luna thanksgiving party. The actor was decked out in his full Antonio Luna costume for the event on Thursday, October 29.

John caused quite a stir as he entered the party, stopping to pose with fans in between interviews too, using the stage’s fake rifles as props. Paulo Avelino, recently announced as the star of an upcoming movie about General Gregorio del Pilar, answered questions nearby. Jerrold Tarog, who helmed Luna, is set to direct.

After the announcement that the movie was in the works, John spoke to Rappler and answered our question about his advice for Paulo for his upcoming role.

“I think Paulo Avelino is a good actor, and I think he knows what he wants and –” John paused, thinking. “Kaya niya ‘yan (He can do it)!” he finished, laughing.

Paulo starred alongside John in Heneral Luna as General Gregorio del Pilar, a young general during the Philippine-American war, known for leading the Battle of Tirad Pass. Del Pilar led a troop of Filipinos against American soldiers, allowing then-president Emilio Aguinaldo to escape to safety.

John later passed his General Luna hat onto Paulo after the announcement earlier in the night. 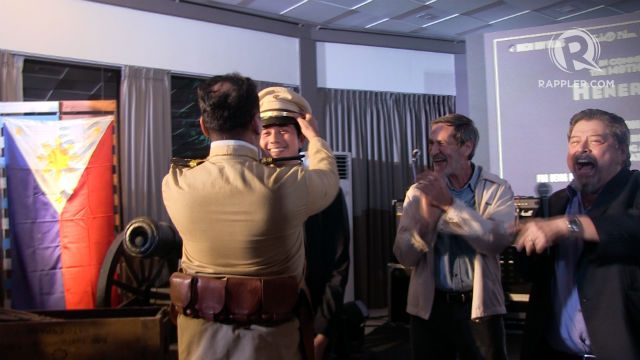 During the interview, the John said that it’s difficult for him to give advice to Paulo, because it implies that he’s better than him.

After patting down his mustache and making sure his pants were correctly stuffed into his knee-high boots, John also spoke passionately about how he feels about the film’s success and the impact he hoped the film would have.

Heneral Luna has earned more than P200 million since it was released on September 9, and is the official entry of the Philippines to the 2016 Oscars in the Best Foreign Language Film Category.

(Words might not be enough to describe what I’m feeling, my feelings might not match the limitation of words.)

Artikulo Uno, the film’s production company, screened the movie in different schools all over the country.

(I just wish, okay, everyone liked it, okay, we liked it, our nationalism was brought to life, but where do we take this?)

John explained how he wished that our love for the film and the country would transcend a stop at the movies. “Sana, kung anuman binuhay sa loob ng sinehan dalhin sa labas (I hope that what was brought to life in the cinema is brought outside).

“I’m not trying to be idealistic here, because this is not just a film, this is about us, as Filipinos… sana madugtungan, at hanggang sa labas mag-transcend sana yung transformation, hindi lang sa mga puso natin kundi sa ating mga Pilipino, bilang bansa (I hope it connects, and the transformation transcends outside, not only in our hearts, but also to us Filipinos, as a nation).” – Rappler.com