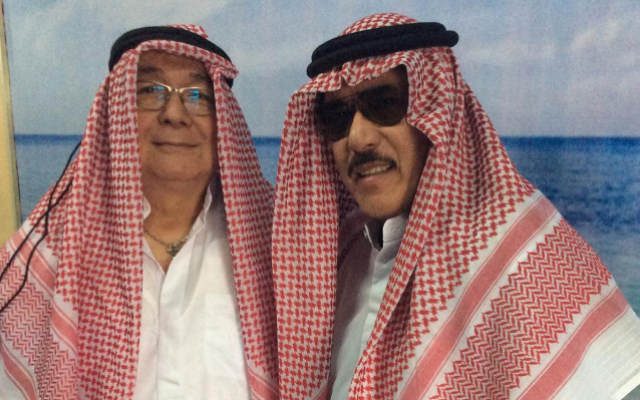 MANILA, Philippines – Senator Tito Sotto took to Instagram to address the controversy over the outfits he and co-host Joey de Leon wore in the Halloween special of Eat Bulaga last Saturday, October 31.

Tito and Joey drew strong reactions from social media after they appeared on the show wearing a keffiyeh or hatta (headdress) and a thawb (long-sleeved garment) often worn by Arab men. (Read more about the garments here.)

The local government of the Autonomous Region in Muslim Mindanao (ARMM) also asked for an apology from the hosts and the show. (READ: ARMM gov to ‘Eat Bulaga’: Apologize for hosts’ Muslim Halloween garb)

On Instagram, Tito defended his attire, saying it was given to him by a sheikh and that he was not making fun of any culture or religion.

“Sheikh Shawaf of Riyadh, Saudi Arabia gave me that costume. He likes it everytime I get a chance to wear it. I wear it to honor him! @aldubnaton,” he said. 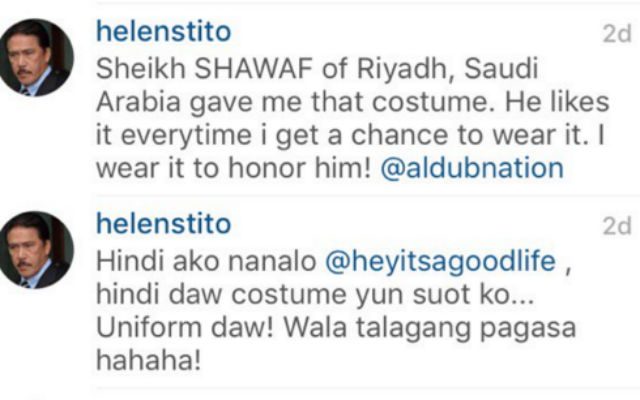 According to a report from the Inquirer, Tito answered: “He [referring to ARMM governor Mujiv Hataman] is wrong! We were wearing an Arab costume. There are Arab Christians if I may remind him. I have been wearing that outfit for many years after a sheikh from Riyadh gave me one and asked me to wear it.

“Others wear priests’, nuns’ and even the Pope’s outfits, and as long as you are not disrespecting what you wear, there is nothing wrong. I suggest the people complaining should find out more about the origin of Halloween so they will not have misplaced sensitivities,” he added.

“Yung ganon may relihiyon. Meron din mga Christian Arabs eh wala namang problema. Ano problema nila?” Tito asked. (Those kinds of costume are related to religion. The Christian Arabs also have and there’s no problem with it. What’s their problem?)

On Sunday, November 1, Hataman in a statement said that the hosts and the people behind Eat Bulaga should apologize for wearing the costume, saying it was not suitable for Halloween.  (READ: ARMM gov to ‘Eat Bulaga’: Apologize for hosts’ Muslim Halloween garb)

“This display betrays an insensitivity by these hosts, as they equated the Muslim garb as a costume to be feared, in the way that zombies and ghouls are to be feared,” Hataman said.

“What Eat Bulaga did in its Halloween Special was a mockery of and an affront to the image of the Muslim, apparently in the name of entertainment….On behalf of the Filipino Moro people, we demand that producers and hosts of the noontime show issue a public apology,” Hataman added.  – Rappler.com