Nov 12, 2015 10:45 PM PHT
Agence France-Presse
Facebook Twitter Copy URL
Copied
The actor makes a stop at The Social Bite cafe, which allows customers to pre-pay for a meal which will later be given to a homeless person 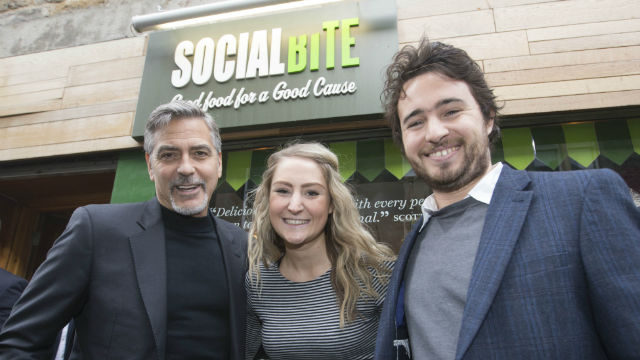 The Social Bite cafe donates all of its profits to charity and runs a scheme which allows customers to pre-pay for a meal or hot drink which will later be given to a homeless person.

A quarter of its staff were formerly homeless and it has a menu created by a Michelin-starred chef which includes haggis and jambalaya.

Mr George Clooney being very generous with his time and taking selfies with our staff today. Go team! 🙂

“I like what they’re doing, I think it’s a very important cause. I think the idea that we can all participate in everyone’s difficulties is really important,” Clooney, who was greeted by a crowd of fans, said before going inside.

Clooney is in Scotland for a string of engagements including speaking at a business awards ceremony in Edinburgh. – Rappler.com