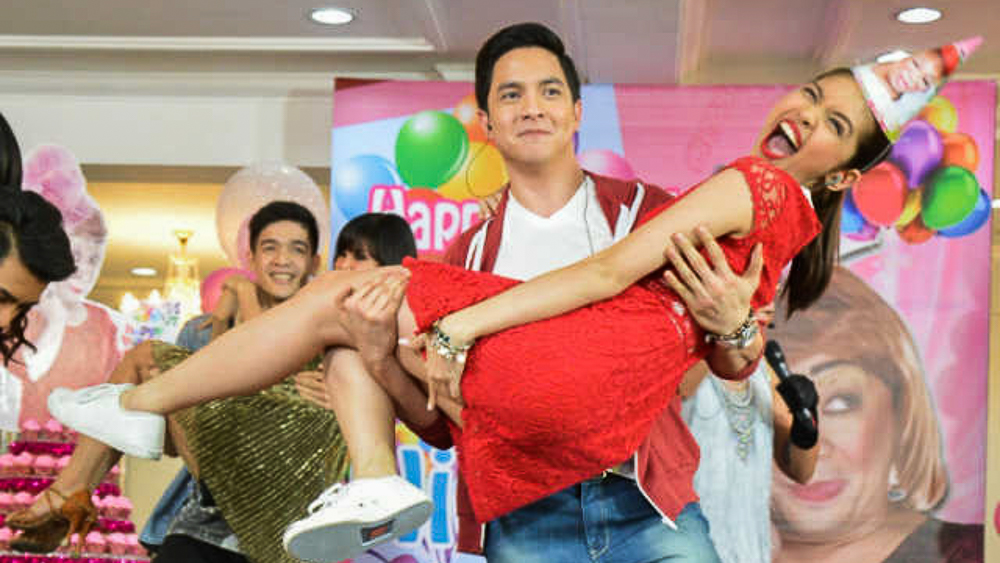 MANILA, Philippines – This week is Lola Nidora’s birthday week and Yaya Dub, Lola Tidora, and Alden planned a surprise birthday party for her. Meanwhile, everyone continued to search for the missing ring on Saturday, November 14 in Eat Bulaga‘s kalyserye.

Since the Tamang Panahon event last October 24, fans of the AlDub tandem continue to watch with great anticipation about what will happen next in the blossoming romance between the two. Alden and Maine’s careers also continue to soar, with endorsements and projects galore, plus a movie in the works.

The kilig factor and laughs continued this week. Here’s what happened:

Lola Nidora was still upset that the ring of everlasting love is still missing, despite everyone’s best efforts to search for it. (READ: #AlDub recap: Maine Mendoza social media hack makes its way to AlDub storyline)

Alden and Yaya also celebrated a special milestone for the kalyeserye, recalling the moments they went through together. Alden sent flowers to Yaya, while Yaya gave Alden a letter. Lola Nidora said she will give Alden 24 hours to search for the ring.

On Wednesday, November 11, Alden got a surprise, when his grandmother Barbara Rockefeller vda de Faulkerson (played by Ai-Ai delas Alas) dropped by to visit him. Alden introduced Lola Babah to Nidora and Tidora as well as Yaya Dub. Lola Babah grilled Yaya Dub, saying that Yaya wasn’t a good match for Alden. She instead recommended a model who graduated from an Ivy League school. Nidora and Tidora defended Yaya Dub, saying she was suitable for Alden, and Alden said he liked Yaya Dub for who she was.

Lola Nidora wasn’t the only one celebrating her birthday week. When Lola Babah mentioned that it was her birthday (in real life, Ai-Ai celebrated her birthday on November 11), Yaya Dub presented her with birthday cupcakes. Nidora then gave another extension for Alden to look for the ring upon Lola Babah’s request.

Back to birthday plans for Lola Nidora: Yaya and Tidora have been very careful in planning the surprise birthday party for the beloved character. When Nidora said that she wanted to go out of town, the two protested.

On Friday, November 13, Nidora revealed that she had two problems. First, she had to take out a mortgage. Second, the mansion has been mortaged – to Alden’s Lola Babah.

Meanwhile, Yaya sought Alden’s help in making a tarpaulin for Nidora’s birthday. She initially got worried about Alden’s Lola and wanted to give up on their growing relationship, but Alden once again assured her that he liked her for who she was.

On Saturday, November 14, the day of Nidora’s birthday surprise, Yaya Dub, Alden, and Tidora continue to finalize the arrangements. Nidora meanwhile had some time to herself, saying she was a bit sad her siblings and Yaya forgot her birthday.

But of course, it was all a ploy to surprise Lola:

Among the guests present at the event were Anjo Yllana and Jimmy Santos, Baste, and Ryzza Mae Dizon as well as the boys of That’s My Bae. Actress Helen Gamboa also made a special appearance.

Alden then appeared with a birthday cake from the AlDub Nation CALABARZON chapter, and Nidora was touched by their gesture. Yaya introduced Alden to her “ninang” (godmother) Helen, who seemed to be very impressed with him.

Meanwhile, Lola Babah made an appearance once again, and she greeted Nidora on her birthday. She was also introduced to Helen. Lola Babah then asked if Alden was sure about Yaya Dub. Of course, Alden said yes.

During the birthday party, messages from Rihanna and Duhrizz were aired. They also played the newspaper dance, which Alden and Yaya Dub won. Of course, everyone got giddy as Alden carried Yaya during the game.

As it was her birthday, Lola Babah said that she was giving Nidora more time to come up with the money (P20 million) to pay for the mansion. Also, Nidora said that she has not forgotten the ring Alden lost. When asked how much the ring was, Nidora said it was P21 million – the episode stopped there.

Will they find the ring of everlasting love? How will Nidora come up with the money to save the mansion? The adventure continues in next week’s kalyeserye.

What do you think of this week’s episodes? Let us know in the comments section. – Rappler.com