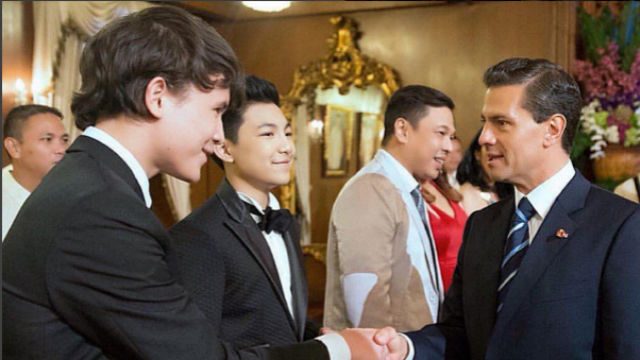 On the Wednesday, November 18 episode of KrisTV, which is hosted by President Aquino’s sister Kris Aquino, excerpts of the program were shown. Among those who performed were Jett Pangan, Radha, and Pops Fernandez.

Kris posted photos from the dinner. One photo was of JK, Darren, and President Peña Nieto’s daughter Paulina, whom she earlier said the boys will serenade.

Darren also posted a photo of him and JK meeting President Peña Nieto himself.

We met President Enrique Peña Nieto last night! It was an amazing experience! Such an honor. #APEC2015

PNoy was teaching our photographer where to position himself. I asked President Peña Nieto for a picture & PNoy told him, “Instagram”

She earlier shared photos from the wreath laying in Luneta Park, where she and Manila Mayor Joseph Estrada accompanied President Peña Nieto.

Scenes from the start of the Mexican State Visit. While waiting w/ Manila Mayor Erap, greeting President Peña Nieto, the wreath laying, & chatting w/ President Peña Nieto & telling him how excited I am for @darrenespanto1 & @karloslabajo to sing for his daughters tonight. He was so warm & appreciative of our Philippine hospitality.

MABUHAY! Welcome back to the Philippines, President Enrique Peña Nieto of Mexico! #APEC2015

President Peña Nieto is in the country to attend the Asia-Pacific Economic Cooperation (APEC) Summit with other world leaders. Kris previously met the Mexican leader when he made a stopover last year from a summit in Beijing.

Last week, Kris announced the roster of performers for the luncheon she and her sisters will hold for the spouses of the APEC leaders attending the summit on November 19. The spouses of leaders from Japan, Malaysia, Singapore, Indonesia, Thailand, New Zealand, Vietnam, Hong Kong, and Colombia are expected to attend the lunch.

Economic leaders are convening this week for discussion on key issues affecting the region. – Rappler.com