MANILA, Philippines – Economic leaders or their nation’s representatives are in the Philippines for the Asia-Pacific Economic Cooperation (APEC) summit, and were welcomed by the country’s top performers at a dinner Wednesday night, November 18 at the Mall of Asia Arena.

In his opening remarks during the dinner, President Aquino said, “Tonight, we Filipinos want to share something of our culture through our food, songs, and dance. And it is my hope that you see why so many have said that ‘it is more fun in the Philippines.'”

(It’s all about professionalism, especially now. We’re not competitors anymore. We’re not contestants anymore. I told them this is the opportunity to show that El Gamma Penumbra is world class.) Martin Nievera and Gary Valenciano shared the stage for the finale and performed “As One.” 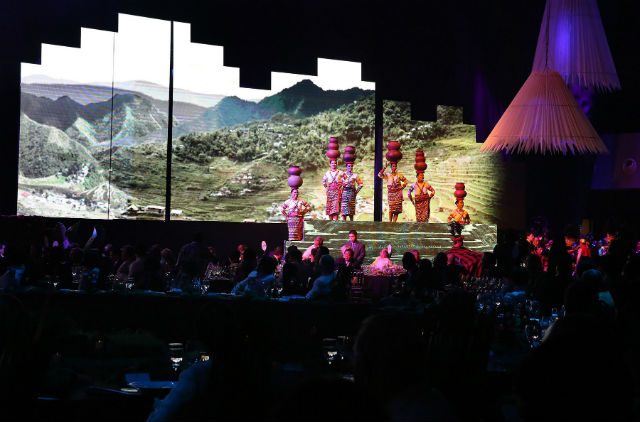 Some of the performers also posted photos of the night on their social media accounts.

Before the show, Charice posted this photo with Jessica on Instagram.

There’s also this photo posted of them on the way to the APEC Welcome Dinner.

Martin Nievera posted this photo of US president Barack Obama in a barong, standing with President Aquino.

What a moment! Barack in a Barong makes it look so Baright!

The Welcome Dinner isn’t the only event that was planned to entertain our foreign visitors. There’s also a lunch planned on November 19 for the economic leaders’ spouses, hosted by the president’s sister, Kris Aquino. Actor Derek Ramsey will co-host the event with her.

Last week, Kris announced that the roster of performers for the luncheon will include Matteo Guidicelli, Ogie Alcasid, Angeline Quinto, and Erik Santos.