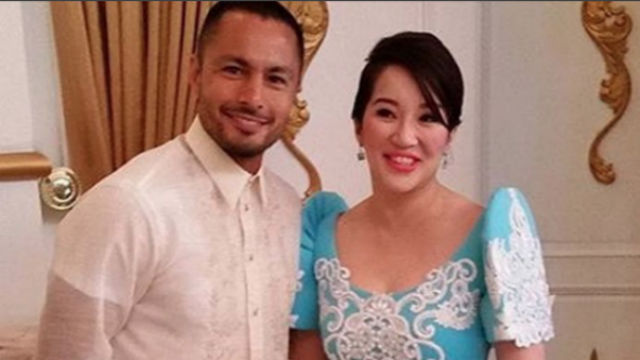 MANILA, Philippines – Aside from the Asia-Pacific Economic Cooperation (APEC) Welcome Dinner held on November 18, President Benigno Aquino III and his team, including his sisters, have more entertainment and cultural presentations prepared for our foreign guests. (IN PHOTOS: PH stars perform at APEC 2015 dinner)

Kris Aquino and her sisters, Viel Aquino-Dee, Ballsy Aquino-Cruz, and Pinky Aquino-Abellada, prepared a lunch for the APEC leaders’ spouses on November 19.

We're at the venue #AyuntamientoDeManila #APEC2015

The lunch was held at the Marble Ballroom in Intramuros.

The simple & lovely stage setup for the performances at the Marble Ballroom in Intramuros. #APEC2015 @pampamintuan @gideonhermosa

W/ Madame Lee, 1st Lady of Singapore, who is also the CEO of Temasek- I was seated beside her during our lunch & I thanked her for the good jobs of our Filipinos in Singapore.

Last week, Kris announced on Instagram that those who will perform at the luncheon are Derek Ramsay, Matteo Guidicelli, Ogie Alcasid, Angeline Quinto, and Erik Santos. Kris herself hosted the lunch, together with actor Derek Ramsay.

Thank you @withlovekrisaquino for inviting me to host the APEC spouses lunch. It was such an honor to be a part of this distinguished occasion.

Some of the performers posted photos from backstage.

APEC 2015! Thank you Francis Libiran for my barong tagalog.#apec

Other guests at the lunch included Lily Monteverde, Virgie Ramos, and Tootsy Angara and her mother.

At the Ayuntamiento de Manila for luncheon hosted by the Aquino sisters in honor of the APEC spouses with my mommy dearest .. Thank you @rajolaurel again !! Wearing my recycled Benguet terno top from last years SONAthank you also @marifemordido

With the First Lady of Thailand, Mrs Drilon , wife of the ambassador and me #apec2015

Before the event, Kris told reporters outside Intramuros that the program was around 20 minutes, and she was lucky to have been able to call in favors from her friends.

Aside from the program prepared, there was also a “small showcase of our world-class Filipino products.” The artists behind these products were at the luncheon too.

Before the lunch, the 9 leaders’ spouses, together with Kris and her sisters, went on a tour of Fort Santiago.

“Ang nanay namin, sinabi na ‘Hindi man tayo mayaman na bansa, sobrang yaman natin sa ating hospitality, sa warmth, (Our mom said, ‘We’re not a rich country, but we’re very rich in hospitality and warmth) and we really want to make sure that everybody who visits the Philippines will go home with a positive impression of all Filipinos,” said Kris of the luncheon.

“And I think we’ve achieved that,” Kris said, not only because of the lunch, but also because of the Welcome Dinner, where artists like Apl de Ap, Reynan dal Anay, Gary Valenciano, Charice Pempengco, and Jessica Sanchez performed.

“Nakita ko naman kagabi (I saw last night) how much they (the foreign visitors) were so appreciative… of our cultural presentation, even I was really amazed at the extent of our talent,” continued Kris.

APEC is an economic forum in the Asia-Pacific with 21 member economies. The economic leaders held their meeting in the Philippines from November 18 to 19. – Rappler.com