#AlDub: Alden and Yaya Dub go on their second date 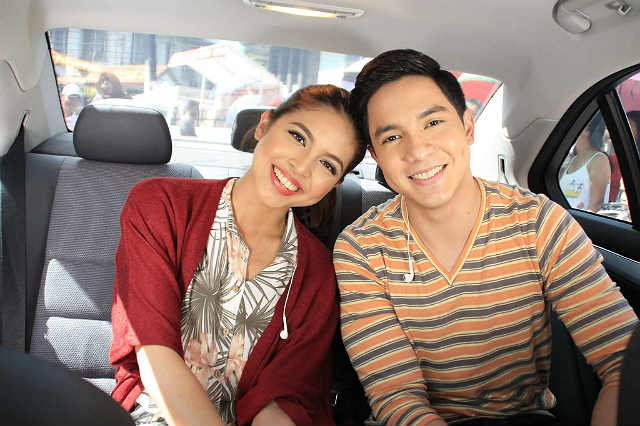 MANILA, Philippines – It’s AlDub’s 18th weeksary, and it looks like someone is out to break up their blossoming romance in Eat Bulaga‘s kalyeserye.

Following the Tamang Panahon event last October 24, AlDub fans continue to monitor the love story developing between Alden Richards and Maine “Yaya Dub” Mendoza’s characters. Their tandem made history on Twitter, with 41 million tweets recorded for the episode #AlDubEBTamangPanahon. They have also appeared in a number of commercials, and will appear in a movie this December.

However, it seems their fragile romance is in hot water. Here’s what happened:

After Lola Nidora’s surprise birthday party last week, Nidora, Tidora, and Yaya are still coming up with the money to pay the mortgage of the mansion which is under the name of Alden’s grandmother Lola Babah.

In celebration of their 4th monthsary last Monday, November 16, Yaya Dub gave Alden a surprise. She told Alden she will give him a card for him to read. She also performed a dance number.

Meanwhile, Lola Babah dropped by the studio and told Alden that she brought the model Cindy Kournikova for him to meet. Alden protested, saying that he liked Yaya Dub, but Lola Babah insisted he meet Cindy (played by Russian model Alina Bogdanova).

Yaya Dub did not back down and showed off her modeling skills as well. Cindy, it seems, is also into Alden. Yaya did not hide her jealousy.

Meanwhile, Alden continued to calm Yaya down, saying that he liked her and not Cindy. When Cindy dropped by on Wednesday, November 18 to see Alden at the studio, Yaya gave it her all in the modeling showdown. It was also there that Alden said his heart only belonged to Yaya Dub, with Cindy walking out of the studio.

With Cindy out, Alden asked Lola Nidora’s permission to take Yaya out on a second date. Nidora said yes.

On Thursday, November 19, Yaya and Alden went on a second date at Broadway, talking over a meal of Yaya’s favorite pork barbecue and isaw (intestines) and juice. Of course, the two had a playful moment, trading jokes during their date.

And here’s what happened while Nidora and Tidora were doing the sugod bahay.

Meanwhile, Cindy dropped by the studio again, and Alden tried to hide from her, but eventually came out when she threatened to tell Lola Babah about the issue.

There was a tense moment when Cindy said that she and Alden were engaged. Yaya and the lolas were shocked, and Alden denied this. When Alden told Cindy to retract what she said, Cindy stood by it, saying Lola Babah promised her.

Yaya, furious, turned her back and covered herself with her jacket. Lola Nidora on the other hand started to scold Alden. The episode ended with Cindy walking out again, and Alden trying to explain.

What will happen to Yaya and Alden? Will the engagement of Alden and Cindy push through? The saga continues.

What do you think of story so far? Let us know in the comments section. – Rappler.com