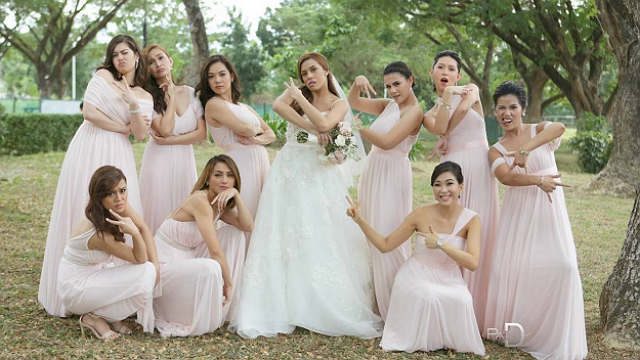 MANILA, Philippines – Nikki Gil and BJ Albert got married on November 21, and their wedding was filled with their close celebrity friends.

Let’s have a look at who was there to celebrate with the happy couple.

Here’s Shaina Magdayao as part of the entourage.

Here’s a photo of Nikki and BJ’s dance as husband and wife.

John Prats and wife isabel Oli with the newlyweds.

Martin Nievera’s son Robin posted this photo of the couple.

Iya Villania-Arellano shares this photo of Nikki and her dad during their father-daughter dance.

Aside from Iya, the other celebrities in Nikki’s entourage were Shaina Magdayao, Bianca Roque, and Patty Laurel. Her entourage’s dresses were designed by Celline Bautista.

Had the privilege of designing and making the entourage gowns for @nikkigil and @bj_albert's entourage! Sooo incredibly happy with how everything turned outCongratulations guys! Thank you for making me a part of this day! #knottinggil #WeddingsbyCelline #CellineClothing

Here’s the back of Nikki’s gown, which was by Elie Saab.

Iya’s husband, Drew Arellano, took photos of the bride before and after the wedding.

The principal sponsors at the wedding were Nikki’s manager Arnold Vegafria, Gary Valenciano, and Kathleen Dy-Go.

Isabel Oli was there too, with her “handsome date,” husband John Prats.

Theater actor Khalil Kaimo took a photo of the bride walking down the aisle, and the bride and groom.

His wife, Arianna Kaimo, was there too.

It's a beautiful day for a wedding#KnottingGil

The couple’s wedding cake was by Joyce Urieta.