#AlDub recap: Alden to Yaya Dub: ‘I love you’ 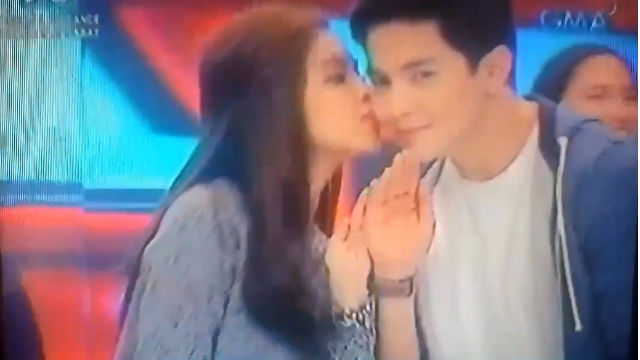 MANILA, Philippines – The December 19 episode of Eat Bulaga’s segment “Juan for All, All for Juan” had AlDub fans squealing during moments that featured characters Yaya Dub (Maine Mendoza) and Alden (Alden Richards).

In the episode, Alden finally said the words “I love you” to Yaya Dub, and Yaya later – accidentally – gave him a kiss on the cheek. (READ: #AlDub recap: Alden and Yaya Dub’s almost-kiss, Alden almost gets married)

The kiss happened on another Eat Bulaga segment, titled “ATM with the BAE.”

But a lot of other events happened in between those moments.

The episode started out with Yaya Dub finally meeting her father, Tatay Dodong. He made his way to the studio, and arrived dancing to Drake’s “Hotline Bling.”

He then told his daughter not to call him “Tatay Dodong,” but “Daddy Dod” instead.

Maine introduced her dad to Alden as her “friend”, though Daddy Dod expressed doubt when he said, “Sigurado kang kaibigan lang (Are you sure you’re just friends)?” Alden then shook his hand, calling him “‘Tay (Dad).”

When Yaya Dub’s grandmother, Lola Nidora, asked Daddy Dod why he looks so different from when she last saw him, he said it’s because he got sick. He lost weight and his once-curly hair straightened out.

Not your regular dad, he's a cool Dad. His name is Daddy Dod!

He then told them that since they last saw him, he moved to Davao and started up a business – an isaw (innards) restaurant. Today, his isawan has 150 branches all over the world.

Up until this point, the gang doubted he was truly Yaya Dub’s dad, but they took his isawan as one proof – Yaya’s favorite food is isaw.

He then proved further that he was Yaya Dub’s dad by dubsmashing (lip syncing) with her. Watch him teaching her how to dance to “Hotline Bling” below:

After a touching moment between father and daughter, Yaya was so overwhelmed that she had to dubsmash. Nobody understood her except Alden, who translated that Yaya was thankful because her Christmas wish of seeing her dad came true.

At this point, Daddy Dod noticed that Alden and Yaya were very close. After Daddy Dod voiced out his suspicions they were more than friends, Alden asked permission to woo Yaya.

To test him, Daddy Dod asked Alden if he loved his daughter. He told Alden not to tell him his answer, but instead, tell Yaya Dub.

Alden spelled out out “Mahal kita (I love you),” before actually saying “I love you.”

Yaya’s dad then advised her not to be rash like him and her mom. They acted too fast, and ended up always fighting, which is why Lola Nidora split them up. Yaya answered it would take a while before Alden hears her answer.

It was then revealed that Daddy Dod remarried and Yaya Dub has a step-mom.

Dod offered to help Lola Nidora with her financial troubles, as they recently lost their mansion to Alden’s grandmother, Lola Babah, to whom they owed a debt. (READ: #AlDub recap: Lola Nidora, sisters, Yaya Dub move out of the mansion)

Lola Nidora declined, but accepted Dod’s offer to help Yaya with her studies.

Lola Babah called up Alden then, and saw Daddy Dod on the split screen.

Daddy Dod offered to buy the mansion back from Lola Babah. She told him he could buy it if he went on a date with her, but he couldn’t. Instead, she sold it to someone else for P600,000.

The episode ended with Daddy Dod leaving for New York on business and telling Yaya that while he can never come back again, he does want to see her again before Christmas.

What did you think of Alden saying “I love you” to Yaya Dub? Let us know in the comments! – Rappler.com