Facebook Twitter Copy URL
Copied
Toni Gonzaga and Paul Soriano, Chiz Escudero and Heart Evangelista, are among the many celebrity couples who got hitched or engaged this 2015

MANILA, Philippines – Many of our favorite celebrity couples celebrated their love this year by getting engaged or tying the knot. Most of them shared these happy moments with their fans too, through social media.

Let’s take a look back at the year of happy couples: The year kicked off with Saab Magalona and Jim Bacarro‘s wedding on January 24. The couple was married at the St Ignatius Chapel in Baguio City. Watch their wedding video below:

Jim and Saab {to infinity and beyond} from Notion in Motion on Vimeo.

February was a popular month for celebrity weddings in 2015. On Valentine’s Day, February 14, Singer Yeng Constantino and her boyfriend Yan Asuncion got married at Hacienda Isabella, Cavite. Photos from the wedding showed a theme of red flowers during the special day. Sportscaster Cesca Litton and Tyke Kalaw were married on February 14 too, in Bohol. It was on February 15 that one of the biggest weddings of the year took place.

Heart Evangelista and Senator Chiz Escudero got married at the Balesin Island Club, and celebrated their union with their friends and family. Among Heart’s entourage were Solenn Heussaff, Lovi Poe, and Alex de Rossi. Senator Grace Poe was the couple’s veil sponsor.

Heart’s parents couldn’t make it to her wedding, but Heart’s cousin read out a letter from her dad during the Balesin reception. In 2013, Heart’s parents were vocal about their disapproval of the match, but she reconciled with them in 2014. (READ: Heart Evangelista’s message to parents before wedding to Chiz)

The couple had two receptions – one in Balesin, and another on February 18 in Manila at Blue Leaf Filipinas, Parañaque City. 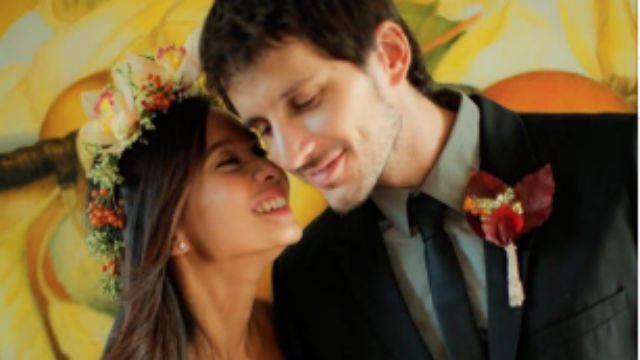 The month closed with another singer getting married. This time, it was Kitchie Nadal who tied the knot with her boyfriend, Carlos Lopez, at Hacienda Isabella in Tagaytay on February 26.

According to her videographer, Jason Magbanua, the simple wedding only had 15 guests. The video of her autumn-themed wedding, though, has been put on private. Gab Valenciano and Tricia Centenera were married twice this year – once on March 27 at the Tagaytay Highlands Golf Club, and again on March 31 at Discovery Shores in Boracay.

The couple’s wedding video featured both weddings, and finished with a dance routine by the couple. On May 10, Diana Zubiri married Andrew Smith at the Sampaguita Gardens in New Manila, Quezon City. Among those who attended were Karylle, Iza Calzado and Francine Prieto.

Listen to their wedding vows below: 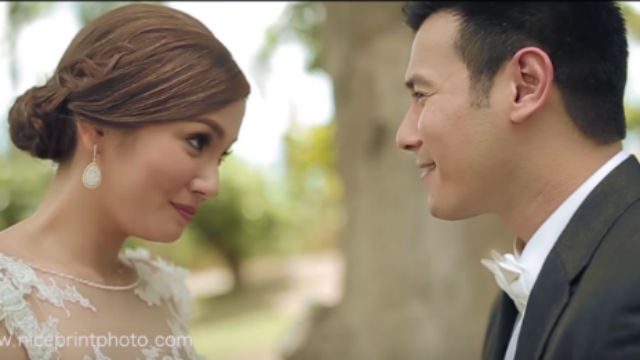 John Prats married Isabel Oli on May 16 in Batangas. The couple had two ceremonies – a Catholic one, inside a church, and a Christian one later in the day, at a garden. The showbiz couple had a lot of stars as guests at their wedding, including John’s sister Camille Prats, his best friend Angelica Panganiban, Nikki Gil, and Gerald Anderson. (IN PHOTOS: Celebrity guests at John Prats and Isabel Oli’s beautiful wedding)

John proposed to Isabel in 2014 through a flashmob. Their 4 seasons themed prenup video was released in April.

The couple announced in Septemeber that they’re expecting their first child. One of the most talked-about weddings this year was Toni Gonazaga and director Paul Soriano’s. The two tied the knot on June 12 the Taytay United Methodist Church in Taytay, Rizal. (IN PHOTOS: Toni Gonzaga and Paul Soriano marry in beautiful Taytay wedding)

You can read their wedding vows here.

It was anounced on the Nice Print Photography Instagram account on July 18 that Camille Prats was engaged to VJ Yambao. The two were reported to be dating in 2013. In 2008, Camille married Anthony Linsangan, who died of cancer in 2011. They have a son, Nathaniel Ceasar.

On her Instagram post about the engagement, Camille said to VJ, “Today, this little boy and I got engaged. I thank God for giving you to us mahal (love).” The photo was of her and Nathaniel during VJ’s proposal.

Today, this little boy and I got engaged. I thank God for giving you to us mahal. Thaaaaank you my love for such a sweet surprise. Di ko to kinaya infairness. I love you my future husband ❤️ @vjyambao1 #PrincessSarahSaidYes @nayomiresort On August 31, Cristalle Belo Henares, daughter of celebrity cosmetic surgeon and beauty entrepreneur Vicki Belo, announced that she was engaged to her boyfriend, Australian hotelier Justin Pitt. Justin proposed to Cristalle on a beach at the Maldives. On September 2, Vic Sotto confirmed that he and Pauleen Luna were engaged. In a September 20 interview on Kapuso Mo Jessica Soho, Pauleen said that the engagement was very simple.

In the same interview, Vic said that he doesn’t read about what critics are saying about him and Pauleen. “Tungkol naman sa edad, wala naman nasusulat sa batas, wala naman sa 10 commandments na bawal ang malabing-labing na hindi kayo magka-edad diba?” (There’s no law, it’s not in the 10 commandments that you’re not allowed to love just because you’re not the same age.)

Francine Prieto got engaged to her boyfriend, molecular biologist Frank Shotkosk on October 6. The two were together for 8 months before their engagement. (READ: Francine Prieto engaged) On October 17, news that actress and model Gwen Zamora was engaged to former actor Jeremy Marquez surfaced when Gwen posted a photo on Instagram recounting how she met Jeremy. The news was later confirmed by Gwen’s good friend Rufa Mae Quinto, who said on Instagram that the couple will be married in December 10, 2016. (READ: Gwen Zamora and Jeremy Marquez engaged) Theirs was a star-studded wedding, with actresses Iya Villania-Arellano and Shaina Magdayao in the entourage. Other guests at their wedding included John Prats, Khalil Kaimo, and Drew Arellano. On December 30, photos and videos of Solenn Heussaf and Nico Bolzico‘s wedding in Argentina cropped up on social media.

Which do you think was this year’s most romantic wedding or proposal? Let us know in the comments! – Rappler.com

*Editor’s Note: An earlier version of this story said that Cesca Litton was married in Balesin. This has been corrected.