Imelda Marcos on Kuya Germs: ‘His legacy will be with us forever’ 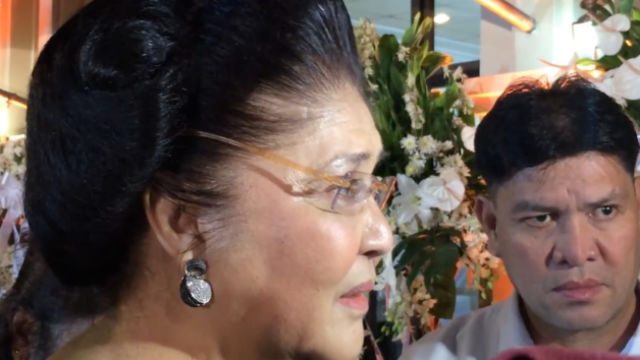 In her speech during the second night of Kuya Germs’ wake at the Mt Carmel Church in New Manila, the former first lady recalled how her relationship with Kuya Germs developed.

Imelda said: “This is a truly sad day for all of us because somehow he made our days in life happier, more beautiful and more pleasant. I remember when I was on trial in the United States, and I heard that his mother just passed away, I called him and said ‘Germs, now that your mother is gone, just remember I volunteer as your substitute mother. From then on, just treat me as your mother.’ And true enough, he treated me like a mother and what a wonderful relation[ship] that we had. And every time I felt down, all I had to do was open the television, watch him, and see how he developed the young to make a better and more beautiful world for the Filipino people.”

Imelda described Kuya Germs as a man who “made lives of people more meaningful, more beautiful and also improved and made our culture so varied and so beautiful.” She also said that she admired him for what he has done for the industry and that his legacy will live on.

“My heart is full of admiration for this man. Last Sunday, I watched him. I don’t know why I stayed way beyond his program. Perhaps I had an inkling that he might go because I heard he had an attack a few days back. But Kuya Germs, you may be physically not present with us anymore, but your spirit will be with us forever. And your legacy of the thousands and thousands of the young people you have developed and made assets for the country to show to the world what a beautiful culture and what a beautiful people the Filipinos are. For this we thank you.

“From the bottom of our hearts, Kuya Germs, we love you, we admire you and you ca be sure, you will always be in our hearts, and we will always remember you with much much love,” she said.

Following her speech, Imelda said that Kuya Germs for her was an “invaluable friend.”

“It’s a great loss. We will never forget him because his legacy will be with us forever,” Imelda said.

Kuya Germs died on Friday, January 8, due to cardiac arrest. In January 2015, he suffered a stroke and took time off from his job as a TV host and radio announcer. He then went back to his job 3 months after taking a rest.

Prior to his death, Kuya Germs hosted Walang Tulugan With The Master Showman, and was the person behind shows such as GMA Supershow and That’s Entertainment, which became the vehicle for many stars to be recognized. – Rappler.com