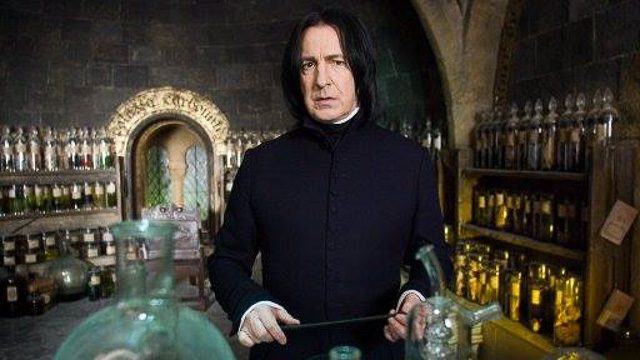 Facebook Twitter Copy URL
Copied
The late actor Alan Rickman took a secret, which helped him play Snape, to his grave, but 'Harry Potter' author JK Rowling has just revealed it on Twitter.

MANILA, Philippines – The prolific British actor Alan Rickman, who passed away last week due to cancer, took a secret to his grave – one that the novels’ author, JK Rowling, shared with him to help him bring Severus Snape, arguably one of the Harry Potter series’ most complex characters, to life on screen. Now, Rowling has just revealed that secret on Twitter. (READ: JK Rowling, ‘Harry Potter’ cast remember Alan Rickman)

In an interview with Irish entertainment news outfit RTÉ Ten in 2011, Rickman said that before starting production on the first Harry Potter film, The Sorcerer’s Stone (2001), Rowling spoke to him over the phone. He told RTÉ Ten, “I needed to talk to her before I could get a handle on how to play [Snape].” (READ: Remembering Alan Rickman: 5 memorable roles)

He said that without divulging his character Snape’s fate, she told him something that could lend nuance to his onscreen interpretation.

There was a dilemma back then: by the time production started on the first film, only the four books have been published. When Harry Potter and the Deathly Hallows, the seventh and final book, was published in July 2007, the adaptation of the fifth book Harry Potter and the Order of the Phoenix just hit the screens.

“I was having to buy the books along with everybody else to find out, ‘And now what?’” said Rickman.

Twitter user and Harry Potter fan @sarahrosefrank asked Rowling if she could reveal what she told Rickman.

@jk_rowling Will you tell us the piece of information that you told Alan Rickman about Severus Snape? Or will that forever be a secret? 🙂

Rowling obliged with a reply:

I told Alan what lies behind the word 'always'. https://t.co/NHTJ5J6kxb

Potterheads have mourned Rickman’s demise with fitting tributes – for example, setting up a makeshift memorial at the Platform 9 3/4 installation at King’s Cross Station in London. Many of them also took to social media channels, expressing their sadness with one word his tragic anti-hero character uttered in The Deathly Hallows: “Always.”

Check out this compilation of Snape’s pivotal scenes throughout the films, and pay special attention to the part where he speaks to Dumbledore (played by Michael Gambon) around the 10:00 mark:

JK Rowling may not have elaborated further, but we feel that this honors Alan Rickman’s memory. What do you think? Tell us in the comments below. – Rappler.com