Boy Abunda to Manny Pacquiao: ‘You do not own my humanity’ 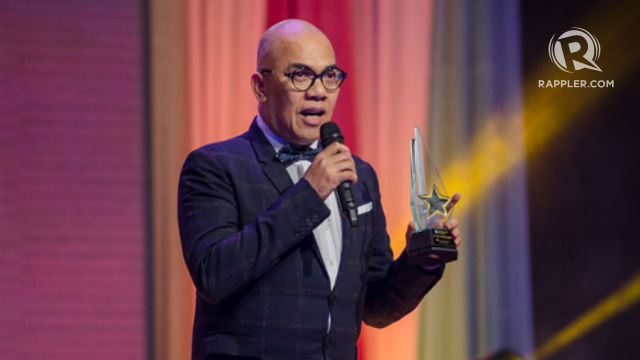 MANILA, Philippines – Boxing champion and Sarangani Representative Manny Pacquiao’s comments on same-sex unions have sparked much criticism, including those of showbiz personalities from the LGBT community. (READ: Pacquiao: Couples in same-sex unions ‘worse than animals’)

On the Tuesday, February 16 episode of his TV show, Tonight With Boy Abunda, Boy Abunda took a few minutes to air his views on the issue of Manny saying that since it was “common sense” for animals to mate with the opposite sex, people in same-sex unions are worse than animals. (WATCH: Pacquiao apologizes for calling gay couples more disgusting than animals)

Boy explained that he voiced out his support for Manny in 2012, because in a 2012 interview with the Associated Press, Manny said, “I’m not against the gay people. I’m not condemning them. … I have a cousin (who is) gay. I have relatives (who are) gay. I have a lot of friends (who are) gay, so I’m not condemning gays. What I said is I’m not in favor of same-sex marriage.”

This time, continued Boy, Manny’s words were different. “Now remember, Manny Pacquiao is considered – or was considered – by many as a national hero. Pero itong mga binitaw niyang salita, para po sa akin (But these words that he said, in my opinion)… he crossed the line. Hindi ako papayag, Manny, if you’re watching, na matawag mo ako na mas masahol pa ako sa hayop (I won’t allow you, Manny, if you are watching, to call me worse than an animal). I am lower than an animal?”

Boy then recalled the struggle of those who have been discriminated against in the past – slaves, women – and said that many are now respected leaders.

(Why am I saying this Manny? Because I want you to know that they did not stop fighting for their rights. And we, in the LGBT [lesbian, gay, bisexual, transgender] community, we won’t stop either, until the end of our lives, until death, fighting for our rights to equality, to dignity, because these were stolen from us.)

Bringing up Manny’s use of the phrase “common sense,” Boy quoted US president Barack Obama, US presidential aspirant Hillary Clinton, and Pope Francis, sarcastically saying that perhaps these respected leaders have some common sense.

From Obama’s 2013 inaugural statement, Boy quoted, “Our journey is not complete until our gay brothers and sisters are treated like anyone else under the law, for if we are truly created equal, then surely the love we commit to one another must be equal as well.”

And from Pope Francis, Boy quoted, “If someone is gay and he searches for the Lord and has good will, who am I to judge?”

(Manny, who are you? Who are you to judge? Where did you get the power to call us worse than animals?)

Boy finished saying that anyone with common sense wouldn’t vote for Manny, who is running for senator in the 2016 elections.

(Last point: We are talking about common sense. You’re running for senator? This is my question, this is just my personal question: do you think I – or our countrymen in this studio or those at home – would I vote for a person who doesn’t see me as a person? Would I vote for someone who thinks I am worse than an animal? Manny, the answer, in your own words, is common sense.)

Before his speech, Boy said that he had heard Manny’s apology already, but still chose to air his views on his late night show, because he had been keeping his feelings about the issue in all day.

Since his interview was released, Manny has apologized for saying that people in same-sex unions are worse than animals. In a Facebook video posted on February 16, Manny said: “I’m sorry for hurting people by comparing homosexuals to animals. Please forgive me for those I’ve hurt.”

To Rappler, Manny clarified, “I am not condemning them (gays), just the act. I do not agree with them having to marry.”

Boy isn’t the only celebrity who has spoken out against Manny’s thoughts on same-sex unions. Vice Ganda, Lea Salonga, and Perez Hilton have commented on the issue on social media. – Rappler.com