Feb 21, 2016 9:26 PM PHT
Rappler.com
Facebook Twitter Copy URL
Copied
Celebrities urge voters to stay informed, others champion the candidates they're endorsing, while some react to the goings-on at the debate 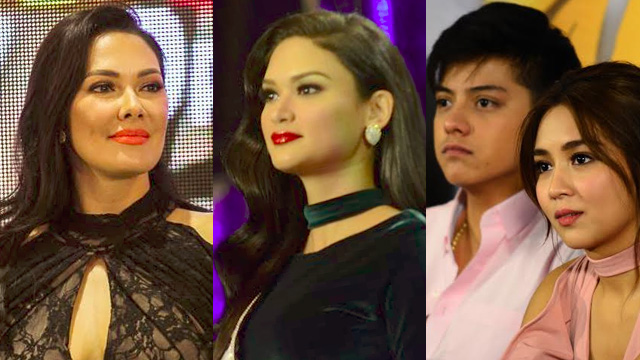 MANILA, Philippines – As the presidential aspirants participated in the first presidential debate in Cagayan de Oro City, Sunday, February 21, celebrities and personalities took to social media to express their thoughts. (READ: LP’s Quimbo: Presidential debate ‘not about being kind to each other’)

Stars urged their followers to watch the debates in order to help themselves understand the various issues (and the candidates’ stands) better.

Miss Universe 2015 Pia Wurtzbach tweeted some of her reactions. Pia, who is based in New York for now, said she was happy that an event like this could be held in order to better inform the voting public. (READ: Pia Wurtzbach shares views on first presidential debate in Cagayan de Oro)

I never thought watching the Philippine presidential elections could be so exciting. Parang Q&A lang may time limit pa

She also said that she would rather not influence others when it comes to their voting decisions, preferring to keep her own choice private.

I am not leaning towards any candidate so as not to influence anybody. The decision is YOURS. Not mine. 🙂 and MY decision stays private.

What I like about most about this debate is that it gets people thinking. Exactly what the people need so they can decide for themselves

GMA-7 actor Aljur Abrenica told followers to stay informed, especially those who will be voting in May.

To all registered voters, tune in and be informed. #PilipinasDebates2016

Luis Manzano engaged his followers, asking who they were voting for based on the candidates’ performances in the debates.

So far, based on the debates, who has your vote? Poe, Roxas, Duterte, Santiago or Binay? (Please include why)

At one point, Kimpoy made fun of Senator Miriam Defensor-Santiago and Mayor Rodrigo Duterte on his tweets.

Actress Kim Chiu said that the candidate who is “true and strong” is the one she will vote.

wanna watch #PiliPinasDebates2016 read alot of tweets here on twitter.. after this meron na akong iboboto!!true and strong is the key!

You are only as good as your last success. #LifeLessonsWeCanLearnFromTheDebate #PiliPinasDebates2016

Other stars posted their reactions to the goings-on.

Beauty queen Trixie Maristela posted a chart from the debate.

So when are these guys supposed to actually debate? #PiliPinasDebates2016

The pasta I burnt was better than the debate #PiliPinasDebates2016

I ask my 3 kids who they want to be the next President, they go for Poe, ask them why? For them Poe is witty. #PiliPinasDebates2016

Other stars who have declared which candidates they will endorse also urged viewers to tune in.

Actress Carla Abellana posted this on Instagram. She is also a Roxas supporter.

Actress Heart Evangelista, who is the wife of Poe’s running mate Senator Francis Escudero, retweeted tweets about Poe’s statements during the event, plus short tweets about the debate.

Meanwhile, parallel to the debate, TV host Mariel Rodriguez Padilla posted on Instagram a photo of husband Robin Padilla, who is in Hong Kong with one of Mayor Rodrigo Duterte’s sons.

She spoke about her husband’s endorsement of Duterte, and said that she admired Robin for his work.

@robinhoodpadilla you continue to make me proud. you were invited to be with the Filipino heroes in HongKong to talk about Mayor Duterte. you paid for your own airfare, you paid for your own hotel and you were not paid a single cent. why did you do that? because you fervently believe that what the country needs is Mayor Duterte. because of you… because you believe in him… i believe in him too. maraming salamat sa lahat ng Pilipino na nagpunta sa pagtitipon sa HongKong.Mabuhay kayong lahat! ang galing mo babe! swerte si Mayor may Robin Padilla na naniniwala sa kanya.

Two more presidential debates in Luzon and the Visayas are scheduled on March 20 and April 24. – Rappler.com