MANILA, Philippines – Superstar Nora Aunor said that she was very proud and happy of how her son Ian de Leon helped a 10-year-old boy named Ethan, who was hit by a speeding motorcycle.

(I’m very proud of him. Of course we’re part of it because he’s my son. The nice deed that my son did brought honor to the family.)

Nora also said that she has yet to speak with her son.

On Sunday, March 27, Ethan’s mother Kristine Madrigal Sarmiento took to Facebook to thank Ian for rushing her son to the emergency room. She was trying to get in touch with Ian, saying, “Such an act of kindness should be emulated by everyone! Not too many Good Samaritans around anymore.”

DOES ANYONE KNOW HOW TO GET IN TOUCH WITH IAN DE LEON, THE ACTOR AND SON OF NORA AUNOR AND CHRISTOPHER DE LEON? I WOULD…

Kristine said that her son went through surgery and had been recovering after the accident.

(Thank you very much, Ma’am Juliet! It just so happened that I was there when the accident happened, but anyone in my place would probably had done what I did. God bless you.) 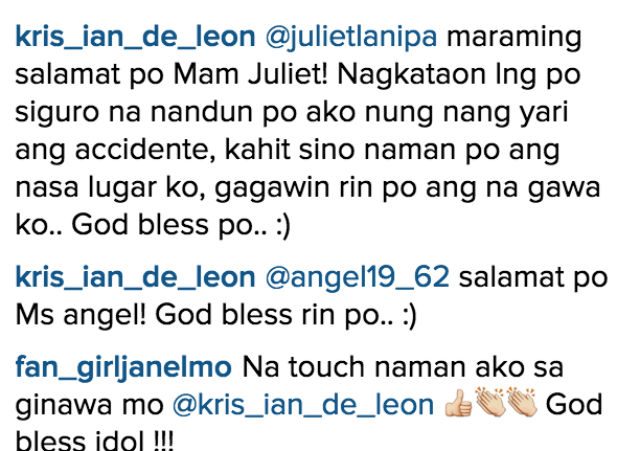