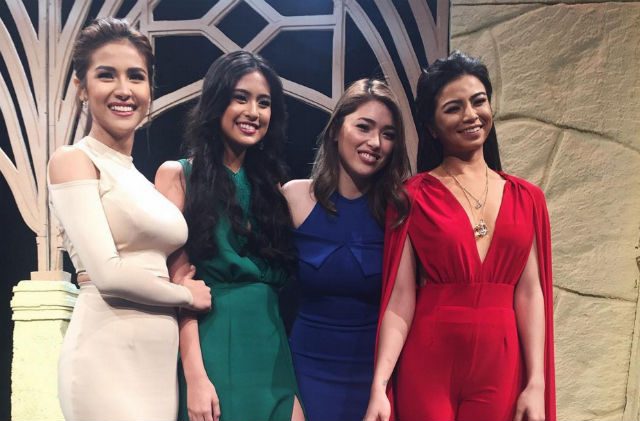 MANILA, Philippines  (3rd UPDATE) – Avisala! Fantasy series Encantadia is back after a decade off the air.

After months of waiting and hints, the 4 new sang’gres (princesses) of GMA 7’s upcoming reboot of Encantadia was revealed on Monday, April 4 on 24 Oras.

Glaiza de Castro as Pirena, the keeper of the gem of fire, originally played by Sunshine Dizon. As the eldest of the 4 sisters, she is the wisest and the ambitious one. She has always prepared herself to one day become Queen of Lireo but she gets consumed by hatred, especially towards her sister Amihan.

Kylie Padilla is Amihan, the keeper of the wind gem, originally played by Iza Calzado. Amihan succeeds her mother Mine-a as Queen of Lireo, and is the most-skilled warrior among the sisters.

Gabbi Garcia takes on the role of Alena, the keeper of the water gem, who was originally played by Karylle. Alena is the third sister who has been blessed with a beautiful voice that can paralyze or kill the enemy.

Newcomer Sanya Lopez is Danaya, the youngest of the sisters and the keeper of the earth gem, played by Diana Zubiri in the original series. Danaya has the ability to communicate with animals and plants, and also heal the wounded. She tends to get into petty arguments and often clashes with the eldest sister, Pirena.

Sunshine Dizon and Diana Zubiri congratulated the new cast especially Glaiza and Sanya who will take on the roles they played on the show.

lets all support the new cast members of ENCANTADIA, im pretty sure it will be great! #Encantadia2016

Congratulations Kylie for being named the new AMIHAN!!! I now pass on the title to you! I'm sure you'll kill it!!!  @kylienicolep

On their Instagram, GMA Artist Center revealed the other cast members.

PEP also reported that other key roles in the show will be played by:

Christian Bautista as Apitong, the leader of the Mandirigmas, played by John Regala in the original series.

Dingdong Dantes, who played the original Ybarro/Ybrahim will return to the show as Raquim, the prince of Sapiro and Amihan’s father.

The announcement of the 4 gem keepers confirmed an early report that they were chosen, with a photo circulating online.

Prior the announcement, director Mark Reyes posted a teaser.

The director also shared the new symbols of the 4 kingdoms – Lireo, Sapiro, Hathoria, and Adamya.

In a report on 24 Oras, director Mark said that as early as 2009, they have been preparing for the show’s reboot, calling it a “requel” or the retelling of the story.

It was previously announced that Marian Rivera will play the role of Mine-a or Ynang Reyna (Queen Mother) in the show. Starstruck winners Klea Pineda and Migo Adecer were also confirmed to be part of the cast.

In 2010, a new series titled Encantadia: The Second Saga was in the plans of GMA. However, the project was put on hold.