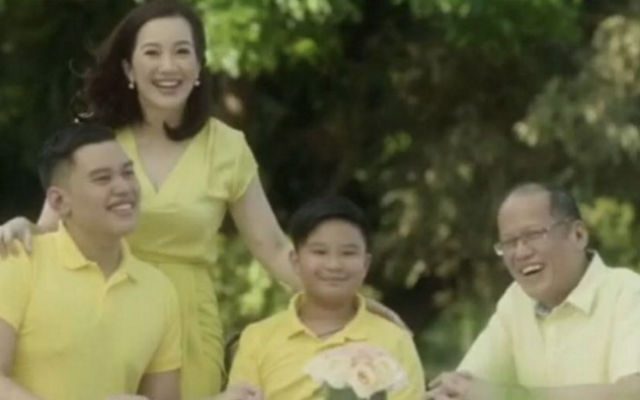 MANILA, Philippines (UPDATED) – TV host and presidential sister Kris Aquino has already responded to criticism against her after photos of her alighting from a presidential chopper to attend a Cebu Liberal Party (LP) sortie emerged online.

She also took to Instagram to thank her family and friends for supporting her with a short message: “True friends defend you behind your back.”

“With all my heart, THANK YOU!”

With all my heart, THANK YOU!

She also posted a photo of her with her two sons and President Benigno Aquino III, with the caption “Because we are #FAMILY.”

Because we are #FAMILY.

She also posted a list that shows her being one of the top taxpayers in the country. However, this did not please many netizens who accused her of being arrogant, as seen in the comments section.

President Aquino also mentioned his younger sister as one of the country’s top taxpayers as he addressed the online uproar from the chopper photos.

(I don’t see what they’re criticizing. My question: I guess all of them know that my sister is among the biggest individual taxpayers.)

Last Thursday, April 21, Kris, who has been helping campaign for LP standard-bearer Mar Roxas and running mate, Camarines Sur Representative Leni Robredo, appealed to the crowd at a LP event in Hagonoy, Bulacan, to defend her from accusations hurled against her.

This came after photos of her alighting from a presidential chopper surfaced online, which have been the subject of criticism from various camps. (READ: Aquino defends Kris’ chopper ride: Why the criticism?)

(I’m being bashed on social media. They are saying that the Aquino family has been taking advantage of this, that we are shameless because I’m using the presidential chopper to campaign.)

Kris has been joining the President in various events across the country, including LP campaign rallies.

Palace Spokesman Communications Secretary Herminio Coloma Jr said in an earlier statement that “members of the President’s immediate family are allowed to ride with him in official government vehicles.”

Kris has been taking time off from her showbiz career, citing health reasons. She has since devoted her time to her children in between helping her brother, the President, campaign for Mar and Leni. – Rappler.com