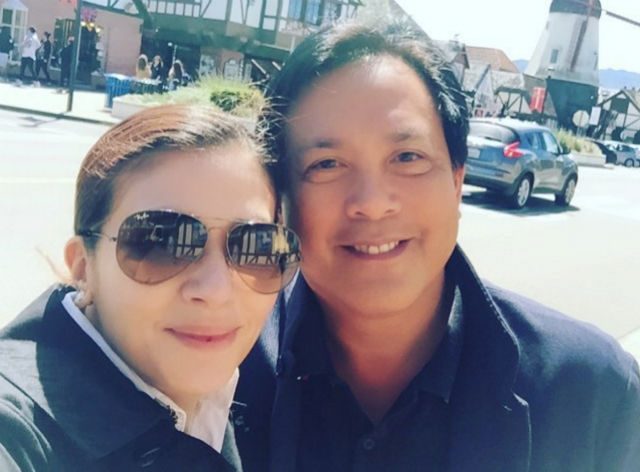 MANILA, Philippines (UPDATED) – Zsa Zsa Padilla and Conrad Onglao have called off their engagement. The two got engaged last year.

Following reports of a breakup, reporters at a press conference asked Zsa Zsa’s daughter, Karylle, for comment. The conference was held on Tuesday, May 3, and was for artists supporting presidential candidate Mar Roxas.

On the issue, Karylle said, “Siguro (I guess) it’s very sad kasi she’s called off the engagement. She’s back home.”

(Of course it’s so hard, I can’t imagine – that’s the thing right, earlier we were talking about bashers, so there are many people who are involved in your life. It’s good in a sense, that you become closer to your fans, but there are moments like this that need to be private.)

“Kung okay lang (If it’s okay), I ask for your prayers and also for the time for her to be alone and private about it,” said Karylle.

Karylle mentioned that she would surprise Zsa Zsa with visits on set to help her cope. She added that she doesn’t know a lot of details on the situation and will leave it to her mom to explain more.

When asked if she was mad about what happened, Karylle answered no: “Siguro dumating na ako sa stage na mature na ako ‘pag may – kung may hindi nagwowork out, di ako nagagalit, more of I’m protective of my mom. Hindi naman halata pero diba, sa hinhin kong ‘to, I’m very protective of people I love, so mabait man ako, I will protect them.”

(I guess I’ve gotten to a stage where I’m mature when there’s – when something doesn’t work out, I don’t get mad, more of I’m protective of my mom. It’s not obvious, right, I’m timid, but I’m very protective of people I love, so even though I’m nice, I will protect them.)

Karylle added that them calling off the engagement is fresh and that it hasn’t even been two weeks yet.

Meanwhile, according to Pep, Zsa Zsa issued a short statement though her handler.

In an interview last March, Zsa Zsa said that their wedding will push through, but that its details would just be a surprise to the public. (READ: Zsa Zsa Padilla on wedding plans, family life)

Zsa Zsa confirmed the relationship in 2014 when she posted a photo of them together holding hands.

Zsa Zsa is the mom of singer Karylle, who is married to musician Yael Yuzon. Zsa Zsa was also the partner of the late comedy king, Dolphy (Rodolfo Vera Quizon, Sr). Dolphy died in July 2012. – Rappler.com