But fans may have questions about the ending, given the source material. Early articles about Civil War noted the fact that in the comic books, Captain America actually dies after the events of Civil War, and wondered whether or not Steve Rogers would meet the same fate in the movie version. (READ: ‘Captain America: Civil War’ review: Entertainment worth fighting for)

In the comics (this arc by writer Ed Brubaker), Cap turns himself in, surrendering to authorities after the events of Civil War, in which he finds himself in conflict with Iron Man and a host of other heroes who believe in the Superhuman Registration Act.

After his arrest, he is killed by a brainwashed Sharon Carter under the machinations of Dr Faustus, who is working with Red Skull to carry out their own evil plans. But in the recent Marvel film directed by Joe and Anthony Russo, the story plays out differently.

***Final warning: read no further if you don’t want spoilers. If you want to proceed, click the button below to view spoilers.***

Captain America does not die in the film.

The fragile truce achieved between Team Cap and Team Iron Man is shattered when later in the film, it’s revealed that the Winter Soldier, brainwashed by the enemy after he was presumed dead following his fall in wartime, assassinated Tony Stark’s parents. The news triggers an explosive reaction from Tony. Brainwashed or not, he must avenge his parents, especially his mother, the parent most dear to him. (READ: Movie reviews: What critics think of ‘Captain America: Civil War’)

A fight between Cap and Winter Soldier versus Iron Man follows. Cap believes that as a prisoner of war (and his oldest friend who never left his side), the Winter Soldier should be protected. But for Iron Man, there is hell to pay.

Cap beats Iron Man, narrowly. At the end, when the dust has settled, he sends Tony Stark a letter saying that though they are on opposite sides of an important issue, to him, Tony is still a friend.

Following a press screening in Singapore, reporters at a round table interview with director Joe Russo asked him how the comic book story arc (with Cap dying) impacted how the directors planned the story in the film.

Here’s what he had to say.

“So from the comics, we just borrowed the idea of Civil War, we didn’t borrow the story. And we still have some more story to go. So we certainly consider every option, and we want maximum impact for the audience, and ultimately, we decided that killing Captain America in this movie was not the right choice for this film.”

Earlier, he talked about how what Marvel is doing with its movie universe is unprecedented – a movie experience that goes beyond a two-hour spectacle and follows a complex story arc encompassing a diverse array of characters and storylines in various stages.

“This is long-term storytelling. What Marvel’s doing is unprecedented. We’ve all understood the movies for a hundred years as being 2-hour closed experiences. And then in the late ‘70s, early 1980s, “sequelization” started, Star Wars, movies like Jaws, the advent of blockbusters,” he explained.

“What they’re doing that is changing filmmaking – and what we’re excited about as directors, my brother and I, because we like cutting edge – we’ve worked on shows like Arrested Development and Community – we like doing things that are trying to advance storytelling.

“They’re taking a lot of different major franchises, and combining them into one story. And I think that’s wholly unique. And they’re very successful at it. And so that’s what excites us about working on these movies.”

Working with Marvel, as Joe has said repeatedly, is like working for the CIA in America – it’s day after day of secrets (and spoilers). 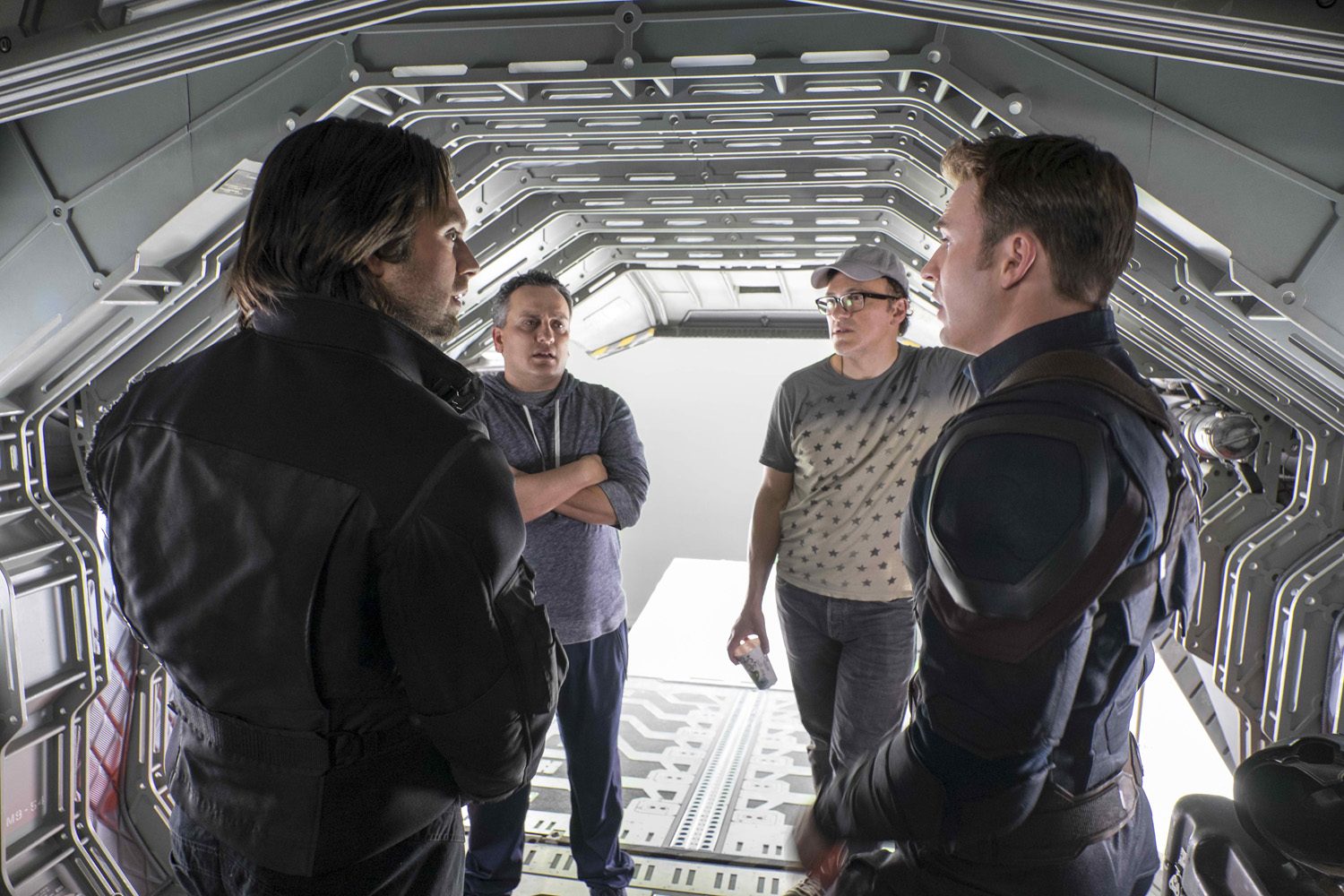 There’s a lot more to come. The Russo brothers return to direct Avengers: Infinity War parts 1 and 2, set to arrive 2018 and 2019.

He wouldn’t say much about that, except: “We start work in November, shooting both stories at the same time. They’re massive in scale.”

Speaking of having “some more story to go,” Joe talked more about how important Civil War will be leading into the Infinity War movies.

“This is an ubiquitous genre, it’s very popular, the market is saturated, and you have to keep being very inventive with where you’re going with the story to surprise the audience,” he said.

“At the time we made the decision to do Civil War, it was for that reason. We thought like, the natural progression, as Sebastian [Stan] said with these characters, was to put them in a fight with each other, because family can get into a conflict, we all know that, we can all identify with that. And when a very controversial issue is introduced to a family, people are gonna have different points of view about how to deal with that issue.

“And that’s what the film is about. It’s really about – we’ve been building up the Marvel Universe for many years, now it’s time to deconstruct the Marvel Universe, to tear it apart. And I think heading towards Infinity War, Civil War is a very important movie, because you’re taking the characters, and you’re putting them in the most complicated place they could possibly be, before they have to deal with the greatest threat they’re ever gonna have to deal with.”

Many fans who love the Marvel-centric TV shows (there are many, from Agents of SHIELD to Agent Carter, which did bring back actors from the films, to Daredevil and Jessica Jones, which have not yet appeared in the movies) wonder if we’ll see the TV characters cross over more to the big screen, particularly for Infiinity War. Joe had an answer for that, too.

“Here’s the thing, these films are culmination films, they are about everything that comes before. They are as big an event as I think any movies that have ever been made, and I think their point is to be an end for some stories and to be a beginning for new stories. And I think that you’ll find phase 4 is very different from phase 1, 2, and 3,” he said, referring to Marvel’s decision to follow phases in their movie releases, developing various arcs and conflicts throughout. Currently, Marvel is in phase 3.

“We have to service and pay attention to the characters that we are working with, and just think about every film that you’ve seen and the films that have yet to be released, and then imagine all those characters being in one movie, that’s a lot. So you know, if you start adding in the television universe, it might just collapse under its own weight.”

Before that, though, fans can still expect a number of films from Marvel.

Here’s the rest of the Marvel lineup until 2019:

Have you seen Captain America: Civil War? Are you a fan of the comic books? How did you feel about the ending? Let us know in the comments below. – Rappler.com