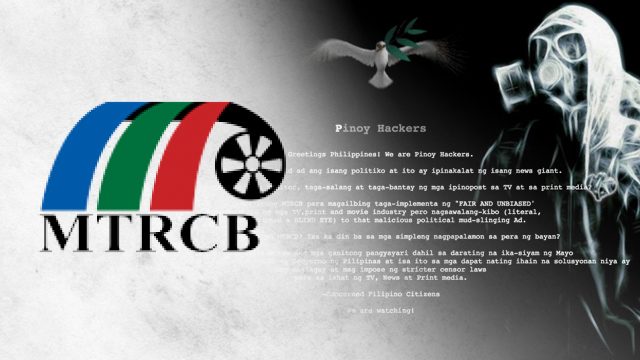 MANILA, Philippines  (UPDATED) – Hackers who call themselves “Concerned Filipino Citizens” defaced the website of the government censorship body Movie and Television Review and Classification Board (MTRCB) in protest of the political advertisement that used children to attack presidential candidate Mayor Rodrigo Duterte.

The hackers did not categorically name the attack ad paid for by Senator Antonio Trillanes IV. But it coincides with online criticisms against MTRCB after television network ABS-CBN aired the controversial ad that showed clips of Duterte cursing, uttering his controversial rape remark, and saying he is ready to kill. In between these clips, children criticize Duterte for his behavior.

Presidential candidate Grace Poe, who is a former MTRCB chairman, was quoted in a report saying the attack ad would pass her standards for truthfulness. She said some vulgarity may be acceptable if it has a redeeming value.

The message posted by the hackers on the website homepage reads: “Anong nangyari sa taga monitor, taga-salang at taga-bantay ng mga ipinopost sa TV at sa print media? (What happened to the organization that was supposed to monitor and check what’s being posted on TV and print media?).”

The hackers called on the next president to impose stricter censor laws for the media.

As of 7pm, the MTRCB website has been restored.

One of its members, Paul Biteng, was arrested for hacking the Comelec website. Biteng claimed he only defaced the website and was not responsible for leaking the personal data of over 50 million Filipino voters. (READ: Fresh grad, 23, admits hacking Comelec site)

The group wrote: “You said Paul ‘should have informed the COMELEC of the vulnerabilities of the website instead of hacking it…. Now we dare you”.

“There were reported cases of electoral fraud during the conduct of the Overseas Absentee Voting and anomalies during the testing and final sealing of the Vote Counting Machines (VCM’s), notwithstanding these reports, the COMELEC failed to inform the public of the actions taken to investigate, correct, or avert poll cheating.”

The group called on Comelec to assure the people that their votes on May 9 will be secured and will be protected. – Rappler.com