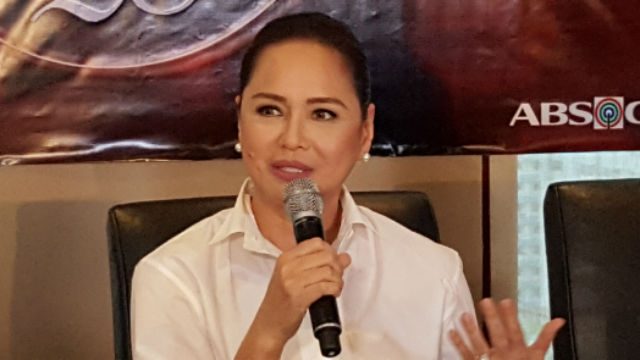 “Yes, it’s true. I just finished a film with Lav Diaz,” Charo told the press during the kickoff event of Maalaala Mo Kaya‘s 25th anniversary on Sunday, May 29. The film, she said, is titled Ang Babaeng Humayo.

When asked when it will come out, Charo said that Star Creatives’ chief operating officer Malou Santos and Lav have yet to discuss more details about its release, but said that it would be part of the Cinema One Originals film festival this year. Further details will be announced in July.

The TV host and media executive said that she did the movie after Lav had approached her after he won the Silver Bear – Alfred Bauer Prize at the Berlin Film Festival last February.

“When he [Lav] came back from Berlin, he asked me if I would reconsider going back to acting, and I said, ‘Yeah, why not, if there’s a good offer or if there is an interesting character?” Charo said. “And two days after the call he sent me the script and nung binasa ko, nagustuhan ko siya, (and when I read it, I liked it.)”

“It was fun. I had so much fun,” Charo said of her return to acting for the big screen. The Internet Movie Database (IMDB) lists her last role in a movie as Isabel Salgado in Esperanza: The Movie (1999).

On the matter of going back to acting full-time, Charo said, “I just go with the flow. I don’t really plan it.”

“Parang whatever the universe offers, if my heart and my gut thinks it’s the right thing to do, and I will have fun, and I will have a great adventure, then I’m open to it. It’s not like a conscious decision na, ‘Ito na, magfufull-time acting na ako. (This is it, I will go back to acting full-time.)’ I really just go with the flow,” she continued.

She stepped down as president and chief executive officer of ABS-CBN at the end of 2015, and currently holds the positions of Chief Content Officer as well as the president of ABS-CBN University. She also serves as the executive adviser to the chairman.

Early this afternoon, Charo Santos on whether she will return to acting fulltime. pic.twitter.com/OGu35uleRi

Charo is currently busy preparing for Maalaala Mo Kaya‘s 25th year anniversary lineup. Aside from the episodes featuring Princess Punzalan, Zanjoe Marudo, Jessy Mendiola, Angel Locsin, and JC de Vera, the show also recently launched its website and will be going abroad to do a series of talks with OFWs. – Rappler.com