MANILA, Philippines  (UPDATED) – Amid the government’s crackdown on drug users and pushers, stars have come forward to announce that they’ve tested negative for drugs.

In a text message to Rappler on Monday, August 29, they said: “Star Magic has just conducted a supervised and voluntary drug test for 40 of its artists to belie rumors of drug use in its community. Results were 100% negative for Jake Cuenca, Enrique Gil, Diego Loyzaga, and the rest of the magic artists.”

It added, “Star Magic believes in the efforts of the current campaign to keep our homes and working environments drug free.”

More celebrities took to social media to post there drug tests results, which are negative.

“Solenn Heussaff has tested negative for illegal drugs. Leo Dominguez of LVD Management & Consultancy Services, the talent management company managing the Filipina-French actress/model, has decided to publicize her results in support of the Government’s stand and campaign against illegal use of prohibited drugs. This is also to inform the public of Solenn’s beliefs of clean and healthy living.

“Solenn practices in what she believes in, which is to live a healthy and productive lifestyle, this includes her  position against the use of prohibited and illegal drugs.” 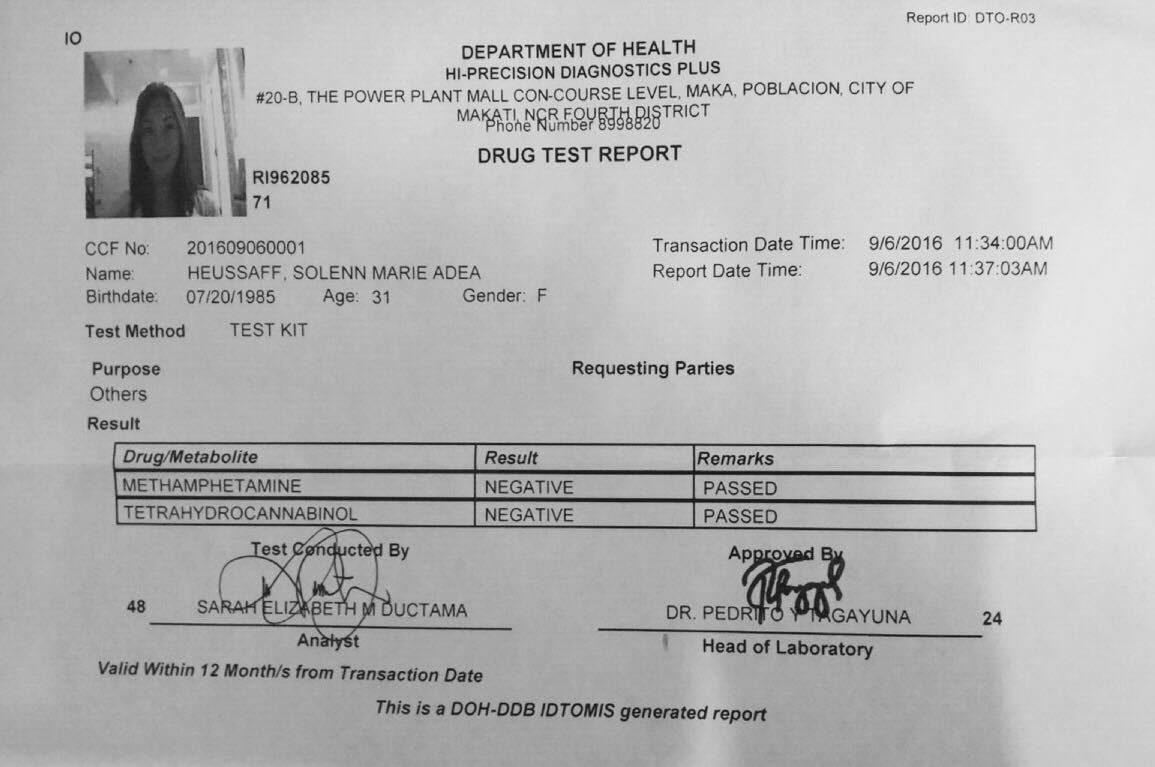 Aside from Star Magic’s artists, actor Baron Geisler posted his drug test results on Facebook. Baron, who has a history of alcoholism, was recently involved in two altercations, one with a University of the Philippines student and another with actor Kiko Matos.

“Thanks to Kowboy for bringing a drug test kit,” Baron wrote. “#QuickProfile
I tested negative by the way, i know everyone is wondering about me, I’m fine and good. I think this is a great idea for everyone to have, just in case anyone is accused on line or by the police.”

In another post, Baron said he was surprised why some reacted negatively to his earlier statement.

Baron wrote: “Can’t understand why there’s so much negative vibes about the drug test photo that I posted yesterday.

“Just to make it clear, that was just a spur-of-the-moment thing that we decided to do yesterday during a shooting break with my co-star Kowboy Santos, who also happens to be a really talented actor, aside from being such an awesome rock and blues musician.

“We’re not making any claims here. Neither are we making any statements.
Unlike what other netizens are insinuating, this isn’t even supposed to be a challenge to our fellow celebrities.

“If any of them feel inspired to do the same, then by all means, they have all the right to do so. So please stop the hate.”

TV host Luis Manzano posted his test results on socia media too, with a funny caption.

(I’ll be honest… I can’t lie to those who love me… yes… I tested positive. My case is: ILLEGAL POSSESSION OF A HANDSOME FACE.)

On Instagram, actor Patrick Garcia shared the results of his test, saying he was doing it for his family.

“I did this because I want my children to grow up in a drug-free Philippines! Supporting our President and PNP on the War On Drugs!”

I did this because I want my children to grow up in a drug-free Philippines! supporting our President and PNP on the War On Drugs!!

President Rodrigo Duterte has kept true to his campaign promise of aggressively addressing the country’s illegal drug problem, publicly naming government officials and police generals who are allegedly in the drug trade.

A few weeks ago, radio DJ Karen Bordador and her boyfriend Emilio Lim were arrested for allegedly violating several sections of Republic Act 9165 or the Comprehensive Dangerous Drugs Act Of 2002.

The police have said that they have a list of celebrity drug users and pushers that they are looking into as well.

Actor Robin Padilla, who actively campaigned for Duterte, has requested the President not to publicly name the drug users in the industry, but expressed support for pursuing the pushers. (READ: Robin Padilla on Duterte, De Lima, and Marcos burial)

With the Philippine National Police’s campaign against illegal drugs also comes an increase in extrajudicial killings that have been linked to drugs. – Rappler.com