MANILA, Philippines – I’m in for anything that celebrates the comic genius of Charles M. Schulz. I grew up watching the Peanuts gang of young, lovable neurotics. Charlie Brown and his friends weren’t just a bunch of kids hanging out in the playground.

You have Charlie, facing struggle after struggle, but always trying his best. The world can be cruel, but he stays a good guy. Then there’s Lucy, dishing out the cruelty and putting everyone down, especially poor Charlie. She’s terribly annoying, but Peanuts wouldn’t be complete without punch lines flavored with her brand of sarcasm.

Linus is the philosopher who often helps Charlie deal with his inner turmoil—despite the fact that he’s younger and still can’t cope without his security blanket. Sally is like her brother Charlie, acutely aware of the world’s injustices. For instance, she questions the C she had gotten for a wire hanger sculpture she made as an art project. Her rant isn’t just adorably funny, Sally makes you think… What defines art anyway?

Schroeder is the Beethoven-loving music geek who gets into amusing situations trying to avoid Lucy’s romantic overtures. Then there’s Snoopy. The most imaginative character in this bunch happens to be a dog. His daydreams include being a World War I Flying Ace who battles no less than the legendary Red Baron. That’s Schulz-style whimsy for you.

I fell in love with the Peanuts gang from the cartoons and comic strips, so I wasn’t sure if I would find them as endearing played by adults—and in a musical at that.

But it works. Quite well, actually. 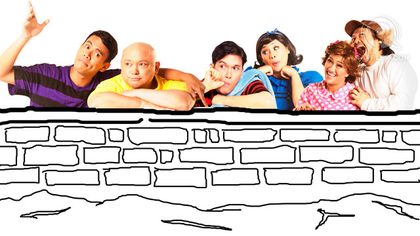 It was all there—the conflict and ambiguity mixed with sweetness and happiness. Sad truths about life and human nature are revealed, yet in the end there is goodness and we’re left feeling warm and fuzzy. Just like life in the Peanuts strips. Just like life, in general. And like the cartoons, there’s wonderful music to go with it too.

In terms of format though, the musical comes closer to the comic strips. There’s no linear story. The whole show is a series of classic Peanuts moments punctuated by the lovely, touching songs of Clark Gesner.

Like a child’s artwork, the staging is uncomplicated as if in reverence to Schulz’s line drawings. There are no razzmatazz effects or grand production numbers either. To me, this is all very Charles Schulz. As an artist he was always a minimalist—in his illustrations and his words.

Because it is such a minimal play that doesn’t even have a running narrative, all eyes are on the characters. This leaves very little room for a bad performance. The night I caught the show, the cast was in good form.

Robbie Guevara played Charlie with the right amount of subtlety, allowing the louder eccentric members of the gang do their stuff. It helps that he also happens to look so much like the comic character. Carla Guevara-Laforteza was an exuberant Lucy. Sweet Plantado-Tiongson put Sally’s sassiness into all her songs. Franco Laurel as a lovable Linus completed a good ensemble cast.

Tonipet Gaba gets special mention for playing Schroeder, complete with lisp and those peculiar arm movements. He hardly looks like the drawn character, but the way he would hang his body over Schroeder’s exaggeratedly small piano was like seeing one of the most eccentric cartoon figures come to life. 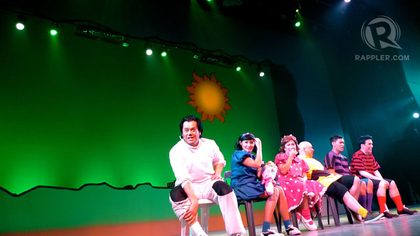 Giving the most rousing solo performances was Lorenz Martinez as Snoopy. You have to see this dog singing about the joys of having supper. I have never seen so much pathos from a beagle!

If you grew up loving Peanuts, you should have a good time watching the show. It offers a rare kind of nostalgia. It’s Peanuts, on stage! It appealed so much to the adult comic fan in me, I almost forgot to say this was meant for kids. So yes, do take yours and let them meet Charlie, Snoopy, Lucy, Schroeder, Sally and Linus. It’s such a refreshing break from a Disneyfied Nickelodeon world.