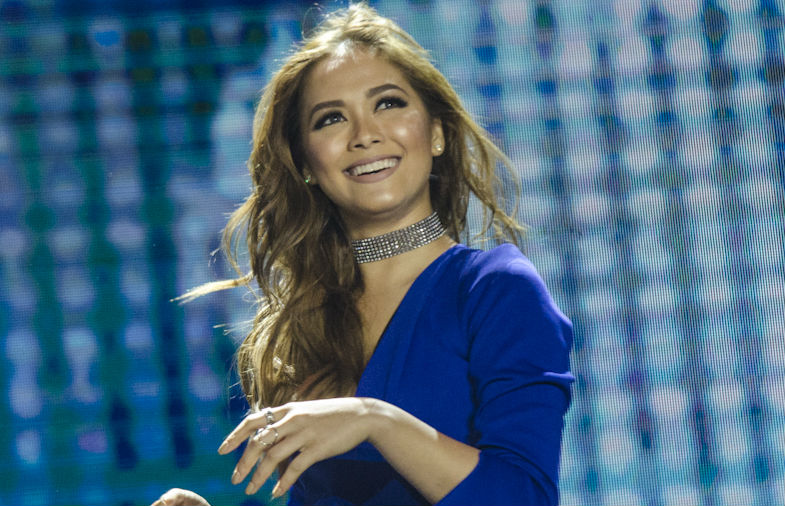 MANILA, Philippines – Maja Salvador and Gerald Anderson may have broken up, but Maja has nothing but nice things to say when asked about the upcoming reunion project of her ex with his ex, Kim Chiu.

(For me, I’m very happy. Why? Because it’s great that everyone has grown. That all have healed, especially with Kim.)

(We all saw what she’s been through, right? Now, she’s really a woman, that she’s accepting all the challenges and she does not care if people will bash her or what. She’s very professional and I’m very happy about that Kim is the kind of woman she is now.)

At the blog conference, Maja was also asked if she’s open to working with Kim and Gerald in the future.

(If the story is good, why not. As we’ve always said, work is work. And we will work with each other time and again. The ones we don’t want to work with, we will work with…there are so many things that can happen in the industry and we have no choice because we’re in one industry. What we want, is to make a beautiful project, a nice film, a nice series, so we can make make all of you happy.)

(For sure the Kimerald fans are very happy. It’s been 6 years, right? And there, ABS-CBN is so good, because if it’s possible, they’ll give in to the supporters…)

As for her relationship with two, Maja said she and Kim are friends, while she and Gerald are civil with each other.

(Kay Gerald, of course we can say that we’re civil. I don’t snub him. But respect, because we both belong to one network, we both had a great past relationship, right? We had a good relationship. And I don’t regret anything that happened to me or in my past, in what happened in my life… I just want to be positive, to be happy.)

After the blog conference, Maja was asked to elaborate on her relationship with the two. (READ: Kim Chiu on Maja, Gerald issue: Why hold a grudge?)

Early this afternoon, Maja on her friendship with Kim Chiu. pic.twitter.com/pK5Z4ezHFN

Maja however said that she would rather not talk much about her friendship with Kim, saying she does not want to be accused of using her.

(We cannot avoid it because Kim is a superstar. And there are fans who will always have something to say but I hope they will feel my sincerity.)

And as for working with Kim and Gerald, Maja said she’s open to working with them individually and not together.

(Okay it’s like this, let’s all be happy that everything is okay. It’s not that I’m declining outright but if you were in my position, it happened to you, will you put yourself in that situation? That everyone will talk about you?)

(Nothing. As I said, Bea is happy, I’m very happy. I already answered before that I’m not in the position to get in the way of a person’s happiness and you can all see it in my face if I have not moved on.) – Rappler.com