PARIS, France – It took a fair bit of cheek – and not a little phlegm on a freezing Paris night – for the brash US lingerie brand Victoria’s Secret to hold its first-ever fashion show in the city that invented sexy underwear.

Au revoir, Paris! Here’s to another AMAZING #VSFashionShow. Watch all this on the runway Dec. 5, 10/9c on @cbstv!

And true to the brand’s brazen style, the spectacle featured a (slightly wounded) megastar, history-struck A-lister models – and a jewel-encrusted multi-million-dollar “fantasy” bra.

Lady Gaga – the star draw for the annual extragavanza famous for bringing kitschy Las Vegas glamour to the catwalk – picked up a “couple of bruises from (the) dance rehearsal”, she told her 64 million Twitter followers.

Couple bruises from dance rehearsal but love rocking this silver VS! Thank you to the Angels for treating me like family! #vsfashionshow #joanne

Here’s a look at Gigi Hadid’s look, which she debuted as Lady Gaga performed: 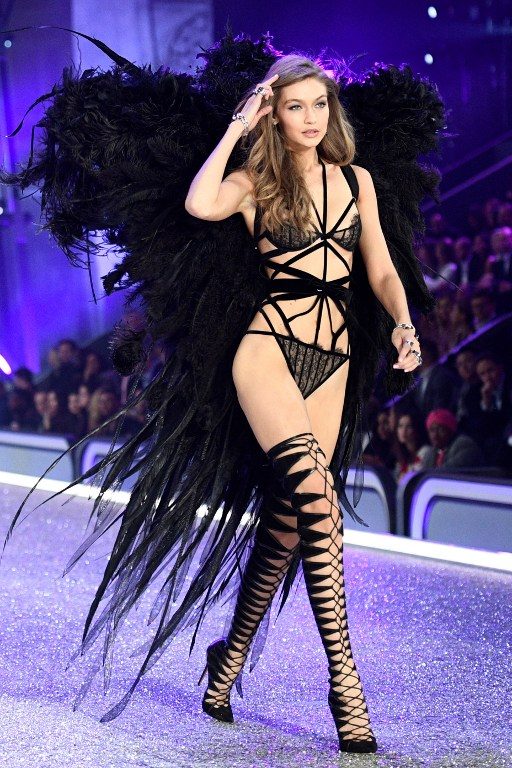 The show’s mostly American models said they felt “goose bumps” – and not just because of the sub-freezing temperatures.

They were also stepping out under the hallowed dome of the Grand Palais, the Art Deco temple where the luxury French label Chanel holds its couture shows.

Karl Lagerfeld, the forthright Chanel designer, was unfortunately not on hand to give his view of the proceedings.

Three of his favorite models – Gigi and Bella Hadid, and Kendall Jenner from the Kardashian dynasty – were among the brand’s “angels”, so called because the models wear wings on the runway. Exes Bella Hadid and performer The Weeknd had a moment onstage:

BELLA HADID AND THE WEEKND CAN YOU HEAR ME SCREAMING #VSFS2016 pic.twitter.com/fIhGM477Pz

And another of Sara Sampaio:

The 35-year-old Brazilian beauty Adriana Lima struck a blow for older models, walking her 15th show on the pink-themed set.

The mother-of-two had earlier said she keeps in shape with porridge for breakfast and a buckwheat drink before bed. “Eating buckwheat before bedtime actually helps you burn calories while you sleep,” she said.

When you know you just NAILED that runway. @alessandraambrosio #VSFashionShow

Irina Shayk hit the runway amid rumors that she was expecting a baby with boyfriend Bradley Cooper.

Another landmark was Jasmine Tookes becoming the “first black woman to sport the Victoria’s Secrets Fantasy Bra in nine years“, after Selita Ebanks and Tyra Banks.

The 25-year-old Californian had earlier batted away allegations that she had bleached her skin for the show.

“Are you kidding me! Who in the world does that?” she wrote on Instagram.

“Lighting is everything… not to mention I’m way darker in the summer and much lighter towards the winter. My skin tone changes all the time just like everyone else,” she added.

Although Victoria’s Secret has nearly 1,000 shops in the US with $7.6 billion sales last year, it is almost unknown in France, where there is a long tradition of high quality lingerie.

Among French fashion figures who attended was Balmain designer Olivier Rousteing, a favorite of singers Rihanna and Beyonce.

And in marked contrasted to the usual Paris fashion shows, even if the models were not wearing much they all had smiles on their faces.

“It was very much an America-style fireworks show that shouldn’t be taken too seriously,” one not overly impressed guest called Ronan told AFP.

The star-studded show, which will be broadcast in 190 countries from December 5, is being seen as an attempt by the label to break into the lucrative European market.

The hype surrounding the event began months ago, with the brand launching the hashtag #trainlikeanangel on social media, showing the models working out to get in shape for the catwalk.

Victoria’s Secret has regularly faced criticism for presenting women with an unrealistic body imagine, with models admitting that they are on special diets for weeks before the show. – Aurelie Mayembo, AFP/Rappler.com