MANILA, Philippines – The stars Sunday Beauty Queen are grateful for the chance to tell their story about their lives working in Hong Kong.

During the acceptance speech, Leo Selomencio, one of the stars of the movie, thanked director Baby Ruth Villarama for giving life to the stories of Filipinos in Hong Kong.

(Actually, I was not expecting this. Thank you so much to everyone in the industry. To the producers, directors, to the actors and actresses. I know you all loved me. Thank you. To the Lord, to the Global Alliance in Hong Kong, to my adopted children. And thank you Ma’am Baby Ruth, who went to Hong Kongand followed wherever I go… to Sir Chuck for the trust you’ve given me.)

Leo also joked that when he watched the film, he felt like Dora the Explorer because of the backup he had. Meanwhile, Hazel Perdido said that she felt nervous onstage. She also thanked Baby Ruth for the trust she gave to them in doing the film.

Mylyn Jacobo, another OFW featured in the film said that as a domestic helper, it was an honor for them to be part of the movie.

(It’s a big honor for us domestic helpers to be given a chance to be part of the [Metro] Manila Film Festival…thank you so much and you given us importance, even if we’re just domestic helpers. To Ma’am Baby Ruth, thank you for the idea to give us a voice, a story…)

“And to all, thank you so much. This is really a [Metro] Manila Film Festival,” she added. 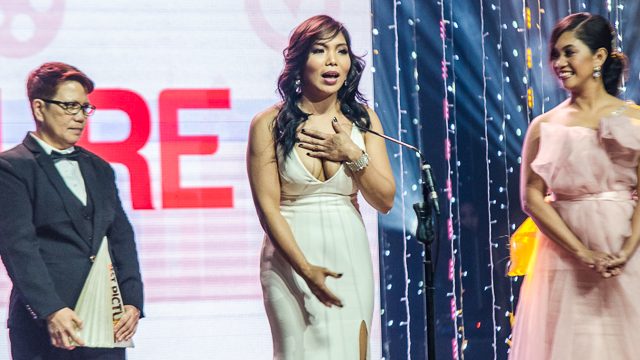 Sunday Beauty Queen director Baby Ruth Villarama said she hopes that the movie’s win for Best Picture will encourage movie theaters to extend the showing of film. The film is one of 4 films that was pushing to stay in theaters before the awards night. (READ:MMFF 2016 films face looming challenge to remain in theaters)

The production team had taken social media to appeal to moviegoers to watch the film and share the reviews.

In an text message to Rappler on Friday, December 30, Baby Ruth also said that the award also served as encouragement for the documentary film community. (READ: MMFF 2016: 5 things to know about ‘Sunday Beauty Queen’)

“It’s a feat for the documentary film community. I am happy that this festival opened a door that has been closed for so long. I hope this encourages cinemas to open more screens so more people can see Sunday Beauty Queen,” she said.

During the Gabi ng Parangal, an emotional Baby Ruth recalled the moment they found out they were part of the Magic 8. (When we found out the results that were in the MMFF, a lot of people thought we were just this little thing who would disrupt the Metro Manila Film Festival every year. But if we’re going to be that little thing that will give change in the industry, then so be it.)

Baby Ruth also thanked her partner and producer Chuck Gutierrez for backing her up on the project and to the OFWs in Hong Kong.

“Thank you for fixing my broken wings so that I can fly.  Sa mga (To the)  Sunday Beauty Queens, who gave access to their private homes, to the 10 million Filipinos who are our modern heroes, kayo talaga ang totoong superhero ng bayan na ito. Para po sa inyo ang pelikulang ito. (you are the true superheroes of this country. This film is for all of you.)”

The cast and crew are currently going around cinemas to promote the film. They also once again appealed to moviegoers to encourage everyone to watch not only the film but all films.