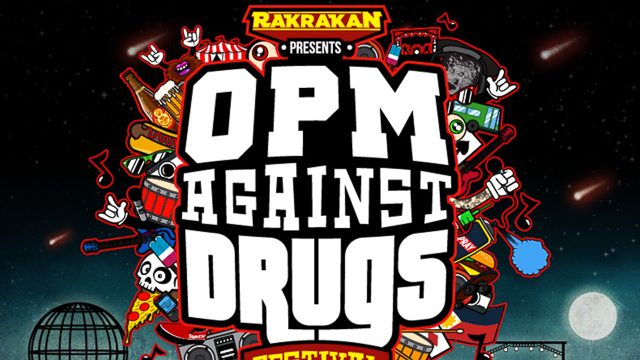 Billed “Rakrakan: OPM Against Drugs,” the festival is set to provide preventive education and a rehabilitiation information drive along with its 100 performing bands and other activities.

At press conference on the event on Friday, January 6, Rakrakan’s Keith Delatorre said that the idea for an anti-drug-themed music festival was sparked by the drug-related deaths at last year’s “Closeup Forever Summer” concert.

Five people died due to drug use at the “Closeup Forever Summer” concert in May 2016, held at the Mall of Asia (MOA) Concert Grounds.

Aside from raising awareness on illegal drugs, the Rakrakan organizers also wanted to dissociate the music scene from drug use.

“We want to divert our attendees, most of them the youth, from drug abuse and addiction through music, sports, and the like. That’s what we’re trying to promote at this year’s festival,” said Keith. “We would [also] like to remove the stigma that the music scene is a breeding ground for drugs. It’s not true.”

The event’s anti-drug efforts will be done in partnership with the Pasay City Anti-drug Abuse Council, the Dangerous Drugs Board (DDB), the Philippine Drug Enforcement Agency, and the Rehabilitation, Alternative Programs, and Interventions for Preventing Illegal Drug-dependency (RAPID) Response Consortium.

Asked if there were instances of drug use at the previous Rakrakan festivals, Rakista Radio CEO Harold Solomon said: “To be honest, for every event naman meron [drugs] eh….Pero not as kagrabe noong may namatay.”

(To be honest, there are [drugs] at every event…but it wasn’t so bad that somebody died.)

To prevent drug use at the festival this year, the organizers will be coordinating with the security at SM MOA and the Philippine National Police (PNP).

Like the Closeup event, Rakrakan 2017 is set to be held at MOA Concert Grounds.

(Of course with the last event  [‘Closeup Forever Summer’], SM MOA and the PNP itself are very strict…so all the events in Pasay really have to comply with the security requirements of City Hall. So all of that is very extensive.)

Earlier at the press conference, Harold also said that there will be drug testing efforts at the festival as well, if the “person is in doubt.”

He said there will strictly be no re-entry, as people could buy or take drugs outside of the festival. Electronic cigarettes are not allowed as well, and inhalers are only allowed with medical prescription.

At the Closeup event, 400 men and 6 sniffer dogs were deployed, though the National Bureau of Investigation said the organizers may not have followed their security measures.

At the press conference, the Rakrakan organizers were also asked about what they had to say to people who think that by supporting the government’s anti-drug efforts, they are also supporting extra-judicial killings (EJKs).

Since President Rodrigo Duterte assumed office in July, over 6,200 deaths have been linked to his “war on drugs.” The deaths are due either to police operations or vigilante-style killings.

DDB Chairman Benjamin Reyes is set to give a speech at the festival, and Keith said they might have Philippine National Police chief Director General Ronald “Bato” dela Rosa there as well. Harold said that they tried to invite Duterte as well, but the President couldn’t make it due to scheduling conflicts.

“‘Yung event naman (The event) will not be political, it’s more on support for the campaign of the government,” said Harold.

He added: “Actually with the drug agencies, we never talaga (really) approached them eh. Once they heard of the event, sila yung lumapit sa amin (they’re the ones who approached us) to support the event.”

Keith also said that they had planned the event since before the EJKs began to happen: “It was directly a response to what happpened to the Close Up incident. Second, I think it’s okay to say that we support the anti-drugs campaign, but we don’t support EJKs, kasi (because) well, we all know that is wrong.”

Rakrakan 2017 will be held on January 14 at the MOA Concert Grounds, where 100 bands will play on 5 stages. Aside from performances and the anti-drug campaign, there will also be a skateboarding exhibition and competition, a street art contest, and a merch exhibit. – Rappler.com