Kristen Stewart says Trump was ‘obsessed’ with her

Jan 21, 2017 10:20 PM PHT
Agence France-Presse
Facebook Twitter Copy URL
Copied
The actress responds for the first time to Trump's criticisms on Twitter in 2012, made while he was a still a reality star on 'The Celebrity Apprentice' 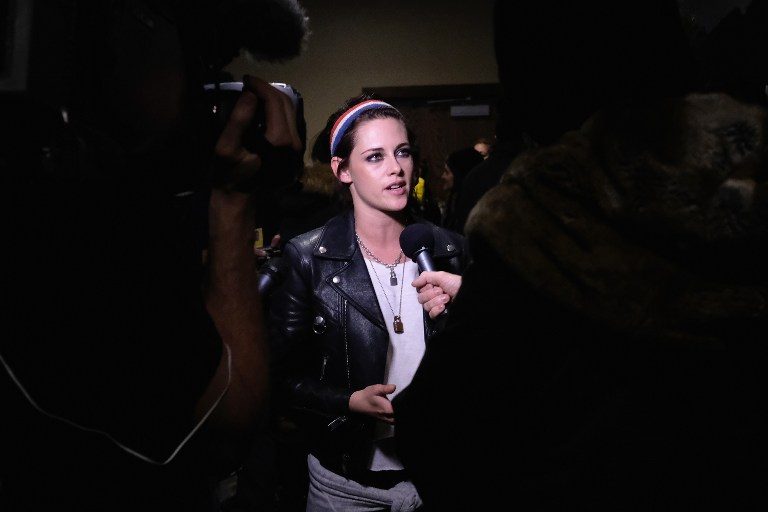 PARK CITY, USA – “Twilight” star Kristen Stewart said on Friday, January 20, that President Donald Trump was “obsessed” with her when he posted a series of tweets in 2012 attacking her for cheating on co-star Robert Pattinson.

The 26-year-old actress responded for the first time at the Sundance Film Festival to Trump’s criticisms, made while he was a still a reality star on NBC’s “The Celebrity Apprentice.”

The newly-inaugurated president posted 5 tweets about the Hollywood couple in October and November of 2012 after the actress was caught cheating on Pattinson with “Snow White and the Huntsman” director Rupert Sanders.

Pictures of the embrace were made public, prompting Stewart to apologize for the “hurt and embarrassment” she had caused through the “momentary indiscretion.”

“Robert Pattinson should not take back Kristen Stewart,” an unimpressed Trump tweeted on October 17.

“She cheated on him like a dog and will do it again – just watch. He can do much better!”

He followed that the next day by revealing he was “100 percent certain” that Stewart would cheat again, adding “am I ever wrong?”

On October 22 he implored Pattinson to “dump Kristen Stewart,” adding: “In a couple of years, he will thank me. Be smart, Robert.”

The couple remained together until May the following year, a month after Trump’s final tweet about Stewart – wishing her a happy birthday.

“At that point, he was just, like, a reality star. I had no reference. It wasn’t like really a thing,” Stewart told Variety’s Elizabeth Wagmeister.

“But in retrospect, somebody reminded me of that and I was like, ‘Oh my gosh, you’re right!’ That was like a couple of years ago but, um, hey buddy, what’s up?”

Stewart, 26, has premium billing at this year’s festival with her directorial debut, the short film “Come Swim.”

She earned critical acclaim for “Still Alice” (2014) in which she plays the daughter of Oscar-nominated Julianne Moore, who portrays a sufferer of early onset Alzheimer’s disease.

She also has a British BAFTA Rising Star Award and a Cesar, dubbed the “French Oscar,” to her name.

Her personal life has been fodder for gossip magazines, with tabloids closely covering her off-screen romance with Pattinson. – Rappler.com