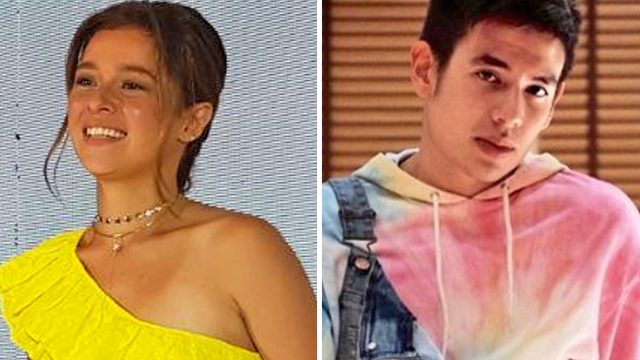 MANILA, Philippines – After former couple Andi Eigenmann and Jake Ejercito exchanged heated words on Twitter, Andi explained her side of things to the press on Sunday, April 2.

On April 1, Andi tweeted: “Please ask yourself first if this is really for the well-being of your child or just for your ego? Just quit it man.”

While Jake was not explicitly mentioned, many understood that the tweet referred to him, because the former couple have one daughter together, Ellie.

In another tweet, Andi added: “It was different then, because I was hurt, and I loved you. But now that I don’t, please just trust that I want what’s best for her, and that includes you!”

On Sunday, Andi spoke after a press conference for the show The Greatest Love, saying that her tweets were a response to news about a petition for joint custody over Ellie.

She said: “Parang there was something that went out na parang (that was like a) petition for joint custody. And for me, na-alarm ako kasi, parang hello, ano ba iyan? Lumalaki na si Ellie (And for me, I was alarmed, because, hello, what is this? Ellie is growing up).

“She’s 5-years-old, and before anything else, do you really think that exposing her to this kind of limelight, to this kind of ka-cheapan (cheapness), will be good for her? Kasi (Because) if this is not for your ego, for your pride or, I don’t know, if this is not for that or out of spite because you just hate me so much, if this is because you really love your daughter and you want what is best for her, I also want that agreement. I also want that joint custody and for him to be part of Ellie’s life.

(Why does it have to be through saying bad things about me, putting down the mom, pulling her down, right? Why do we have to involve everyone, that, you know, right, that this is what ruined everything? All that publicity and misconception between both parties. I’m not pretending to be the victim here.)

Many took Andi’s two tweets to be a response to a message Jake posted on March 31, saying: “It’s a bummer how, after all this time, you still crap out of your mouth.”

It's a bummer how, after all this time, you still crap out of your mouth

Despite the issue, Andi said she is open to talking with Jake. The two rarely talk and mostly pass messages to each other through Jake’s sister Jerika.

At present, Andi said that she has no more feelings for Jake and that she’s very much happy with her new life and relationship with boyfriend Emilio Arambulo.

Ellie spends time with her and Emilio, Andi said, but Jake doesn’t seem too happy about it.

(What I don’t understand is why he’s always questioning why the 3 of us are always together. Of course I have my own family, but that doesn’t mean that Ellie is not Jake’s family anymore. We can share, right? But at the same time, he’s also saying that I’m leaving my daughter so I can be with my boyfriend.)

“Ang gulo. Feeling ko… basta para sa akin (It’s so confusing. I feel… for me), I just want to be sure that this is for the well-being of my daughter. And if there are side purposes, I’m not going to make patol (respond) because I have no time.”

In August 2016, Andi and Jake also had a heated discussion on Twitter, after Jake’s name was mentioned while Andi was promoting her movie Camp Sawi. (READ: Andi Eigenmann, Jake Ejercito’s heated Twitter exchange)

In September, Andi’s sister Maxene Eigenmann confirmed that Jake was Ellie’s father. Jake said that he did not say he was the father in order to protect Ellie’s privacy. – Rappler.com