Nov 26, 2012 11:39 AM PHT
Rappler.com
Facebook Twitter Copy URL
Copied
The director has reportedly been 'battling disease' for quite some time He was declared dead on arrival at 3am at Pakil General Hospital in Siniloan, Laguna, according to Interaksyon.

Ad Castillo is dubbed the “enfant terrible” and “The Messiah” of Philippine cinema. His films were akin to American director David Lean’s sweeping epics. Director Elwood Perez relayed the news of his colleague and contemporary’s passing to Rappler. According to Perez, Ad Castillo was to be part of the 12 Masters Film Festival scheduled for 2013.

Here are some posts we found in Celso Ad Castillo’s Facebook page: At the time of Ad Castillo’s death, he was on post-production work for his entry, a horror movie, a return of sorts to one of the genres he dabbled in in his long and quite illustrious career as a filmmaker (think Maligno and Patayin sa Sindak Si Barbara).

He was also set to launch an autobiography.

Gorio Vicuna posted this video in the director’s Facebook page:

“I remember you telling this at our directing class… To achieve immortality: Make a child, plant a tree, MAKE A MOVIE,” posted his former student, Christiane Camat.

Siniloan, Laguna is also Ad Castillo’s birthplace. According to ABS-CBN, his family plans to bring his remains there. – Rappler.com 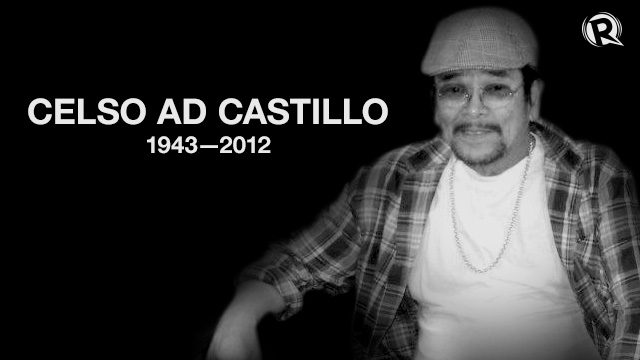