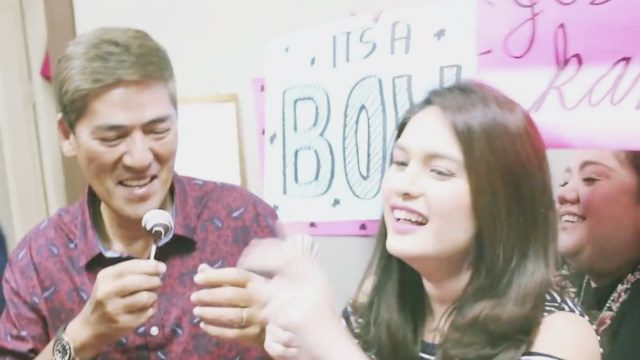 On Sunday, June 25, a video of their gender reveal party was posted on Eat Bulaga’s social media accounts.

In the video, the hosts of the show held blue banners for “Team LeBron,” rooting for a boy, while others held pink banners saying “It’s a Girl” and “Jessica kami (We’re for Jessica).”

Vic and Pauleen opened a box of chocolate lollipops, which would reveal either the color blue or pink. Upon biting the lollipop, it turned out to be pink, signifying they are having a girl.

After reports came out that their daughter would be named Jessica, Pauleen clarified in an interview with Pep on Monday, June 26, that she and Vic have not yet chosen a name.

Back in May, the couple had announced on Eat Bulaga that Pauleen was pregnant.

On Instagram, Pauleen posted a video of Vic’s announcement, saying in the caption: “Finally, a bun in the oven! Can’t be more proud and excited to be a mom. Thank you to my handsome for surprising me with this announcement. Thank you Lord for being so gracious!”

This is the 5th child for Vic. Danica and Oyo are his children with ex-wife Dina Bonnevie. Paulina is his daughter with Angela Luz, and Vico is his son with Coney Reyes. – Rappler.com