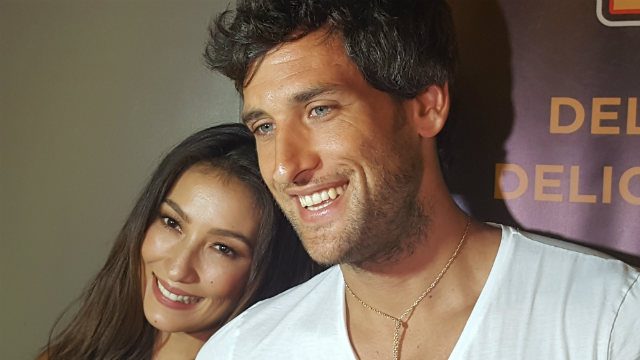 According to Nico, Solenn was very upset with him after the hair dryer prank he pulled on her that he had to clean the mess.

Planned this for the longest time and I just realized I went a bit too far! I will be asking for forgiveness for for a few days but the video is for eternity … Bebe, I love you and I am so sorry! #wifezillaseries #wifezillathemime #isawthisonline #pleasedontleavemesolenn

“She told me to slow down a little bit because I was going a bit over the top. So since that prank, there were no more pranks,” he said during the press conference for their newest endorsement deal with Kenny Rogers on Monday, August 14.

“I’ve been pranking people since 1995. It’s just now that I’m pranking a famous person, that why it becomes a big deal,” he added.

Turning serious, he said: “The reality is I call her wifezilla is because she is actually the opposite of a wifezilla.”

Solenn added: “I’m just super wifezilla when it comes to the house – cleaning, tidying up the house. The rest, [I’m] just chill.”

Although they have been married for a year now, Solenn and Nico said that they are still taking time to enjoy being together as well as concentrating on their respective careers. Family plans can wait.

“We’re at the age where our career is at its peak dapat, so we’re going to work a little bit more before having a little [Nico],” Solenn said.

“I want [to have kids] but she’s telling me to slow down,” Nico added. Currently, they have a pet turtle named Patato and might get a dog as a practice for their future family.

As for appearing on screen, Nico said that he’ll leave showbiz to Solenn.

“The truth is I’m not a good actor. So I won’t be able to perform as an actor. So if you ever give me a script, I would just like [no],” he said. Solenn said that she and Nico are open to the possibility of doing more commercials and endorsements, but they choose carefully.

“We’re game naman but we only like to endorse things that we really believe in, actually use, or wear. So we’re picky,” she said. – Rappler.com