WATCH: Night King cosplayer shows us what a winning costume is made of 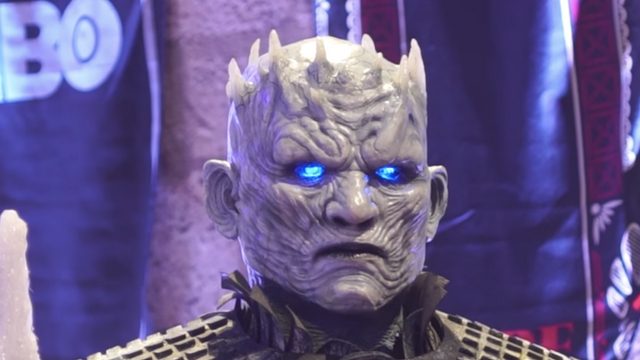 MANILA, Philippines – It took what felt like an eternity for Xidge Evangelista to travel from the first floor of the SMX Convention Center to the second, as he was swarmed by fans asking for photo ops practically every step of the way.

Then again, it wasn’t Xidge Evangelista who was walking along the halls, but the dragon-killing Night King from Game of Thrones, Xidge’s chosen character for the Thrones-themed cosplay competition at the 2017 AsiaPOP Comicon (APCC).

Xidge, who could barely talk through his thick sculpted Night King mask, told us how he DIY-ed the cosplay that won him $1,000 dollars in the APCC competition. The elaborate process included cutting rubber by hand to fashion the Night King’s skirt, painting the armor to give it a wintry look, and enlisting the help of his friends Gerz Binarao and Dennis Castor to sculpt a mask out of clay, latex, glue and blue LED lights – because contacts were simply not enough to recreate the Whitewalker leader’s chilly blue eyes.

The effort of making and putting on the costume paid off. Both the judges – including celebrity cosplayer Alodia Gosiengfiao – and fans of the show were impressed. As for Xidge, he was simply happy to be able to bring the character to life.

“I want to bring out the best of the character, kasi yun yung pinakapwede ko pang sabihin na yeah I did my job (that’s when I can say I did my job),” he said.

His words of advice to aspiring cosplayers? Use your imagination, choose a character that suits you, and, most importantly, enjoy. “This is all about fun,” he said. – Rappler.com

Editor’s Note: An earlier version of this article referred to the Game of Thrones character as Night’s King. This has been corrected. We apologize for the error.