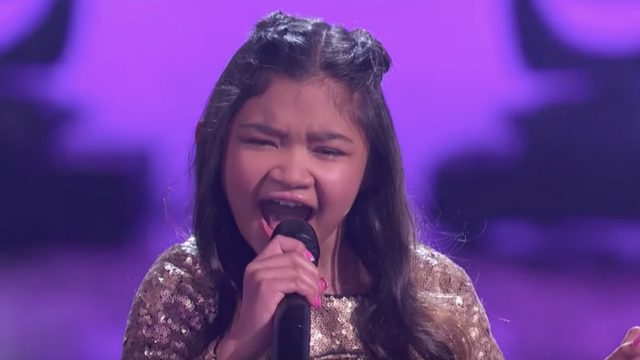 MANILA, Philippines – America’s Got Talent season 12 hopeful Angelica Hale has consistently wowed judges and the audience since she joined the competition – from her audition, to the “Girl on Fire” performance that sent her straight to the live shows, to her David Guetta cover that advanced her to the finale.

Now, her flawless cover of Clean Bandit’s “Symphony,” which she performed on the show on September 19, may just win her the competition.

Angelica, who was backed by a group of instrumentalists, hit all the song’s high notes effortlessly, as she has been doing pretty much the entire competition.

Her performance even left judge Heidi Klum gushing, saying, “I mean you’re only 4 feet tall, but you are a giant! You really are. You’re unbelievable.” Klum went on to say that she thinks Angelica is the best singer in the competition.

In a tweet post-show, Angelica said, “I absolutely gave it my best shot 2nite [sic] & hope you all enjoyed this performance as much as I enjoyed giving it!”

I absolutely gave it my best shot 2nite & hope you all enjoyed this performance as much as I enjoyed giving it! With#AGTFinale #AGThttps://t.co/vWo9yLo3UL

The winner of America’s Got Talent season 12 will be announced on September 20 (September 21, Philippine time). – Rappler.com