Oct 4, 2017 12:40 PM PHT
Rappler.com
Facebook Twitter Copy URL
Copied
Andi replies to netizens who accused her of being a snob 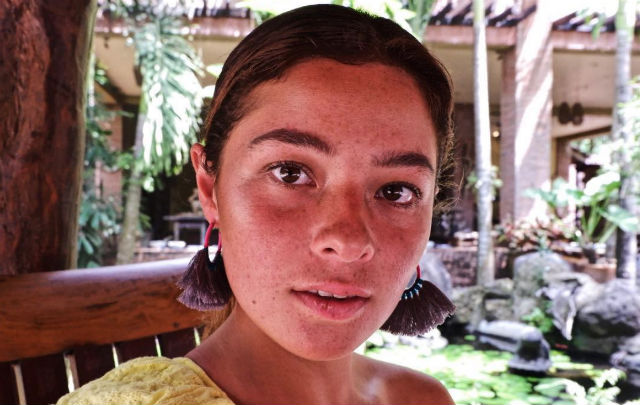 MANILA, Philippines – Has Andi Eigenmann really left showbiz? Judging from the conversation on her Instagram post, it seems yes.

On Monday, October 2, two followers commented on Andi’s picture, with one of them saying that the actress allegedly snubbed her sibling who requested for a photo.

(Andi is a snob according to my sister. She wanted to have a photo with her at the airport but Andi just raised her eyebrow.)

Andi replied to the comment saying:  [Vieveyanong] Ma’am, before you comment such an accusation on my instagram page, I hope you realise that I am a human being too, just as your sister is, and while she must’ve just been thinking about herself and her own feelings as she wanted to snap a photo with me, she probably didnt think that MAYBE just MAYBE, I do not walk this earth simply to please her nor you. Maybe JUST maybe, instead of negatively judging another person because you didnt get what you want from them, maybe we can learn to realise that WE ARE ALL THE SAME. AND WE ARE ALL HUMANS.”

She added: “So yes. It truly is sad. Sad to know that there are judgmental, narrow minded people like you, who would instantly rush to a conclusion insisting that someone you [DON’T] KNOW, isn’t a good person just because I couldn’t fulfill your sister’s hunger for a sense of entitlement. Actors may have made a commitment to be there for you, but it doesnt mean that we deserve for our personal space to be disrespected, and that our feelings and comfort should be completely disregarded.” 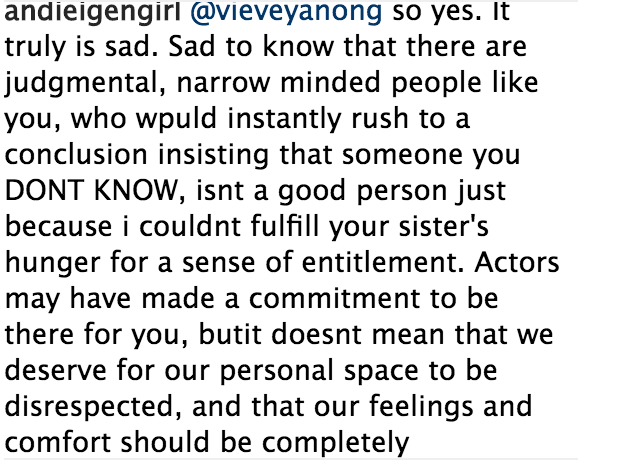 Another commenter that goes by the name @60journey said: Okay lang na tumanggi ka (It’s okay for you to decline) but to snub a fan is something else. Kunti na lang fans mo ganyan ka pa (You only have a few fans and you act like that). Even casual viewers like me, natuturn-off sa ganyan [sic] attitude. Eat some humble pie. Be grateful na lang people still adore you kahit hindi ka na sikat (even if you’re no longer famous).

Andi replied: ” First of all, I don’t snub people who acknowledge me. I do, however, politely tell off people who are rude. How can you even say that if you have no idea who I even am? Second, if I wanted the life I had in the past, I wouldn’t have left showbiz. So go figure. But me wanting to be a full time mom, and to live my life sooo far away from the spotlight (away from the city, even), doesnt also result to your accusations being anywhere true. Ma’am, fyi, FAME IS NOT THE SOLUTION. And it pains me to that there are people like you who think that this is something I should even be sad about. I left because I was not happy. And yes! It will never be the same. BUT I WOULDNT TRADE THIS SIMPLE LIFE FOR ANYTHING ELSE BECAUSE I HAVE NEVER BEEN HAPPIER. YOU did not know that did you? SO DONT ASSUME. SO DONT SPEAK IN BEHALF OF OTHERS. BECAUSE YOU DO NOT KNOW OUR STORY.” 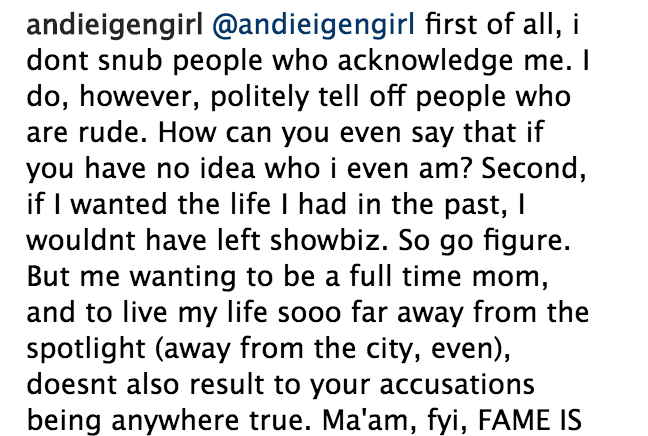 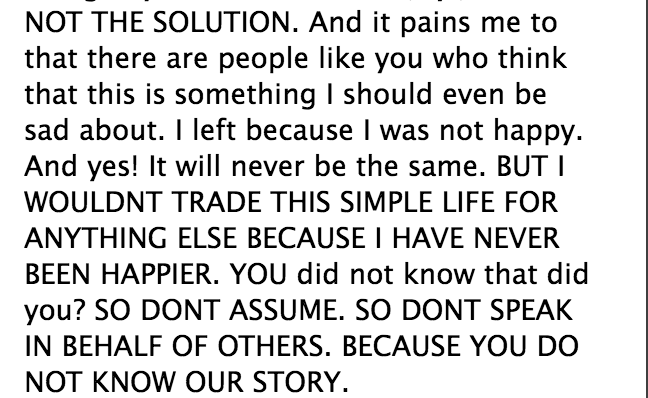 Andi also added that instead of talking about her personal life, there are other important things to talk about.

She also told off the netizen for calling her rude when he or she was not even there.

“The point here is that you have no right to insist that I was the one who was rude when you weren’t even there. Nakikisali ka lang naman eh (You’re just butting into the discussion). So how would you know? What if I tell you I can’t even raise an eyebrow? I just cant intentionally do it. What if, this lady approached me the wrong way, and I felt like she was getting in my personal space? I DO NOT WALK OUT OF MY HOME THINKING OF MYSELF AS A FAMOUS PERSON. I WALK OUT OF MY HOME BEING ME. JUST AS YOU ARE. So if she has the right to be rude to me, why is it that I have no right to decline? HOW DO YOU EVEN KNOW THAT I DONT HAVE THE AUDACITY TO SMILE AT PEOPLE WHO ACKNOWLEDGE ME? YOU WOULDNT. CUS YOU HAVE NO IDEAD WHO I AM. Nakikisali ka lang.” 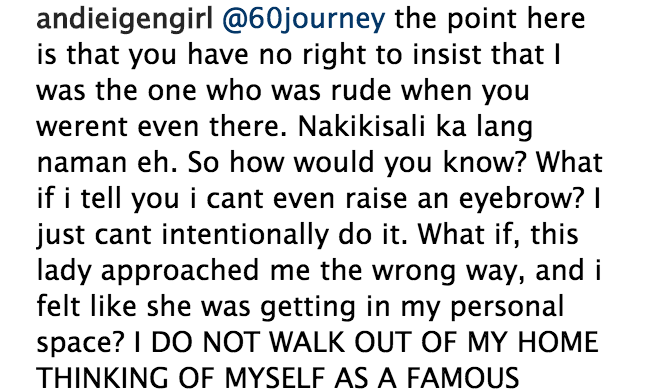 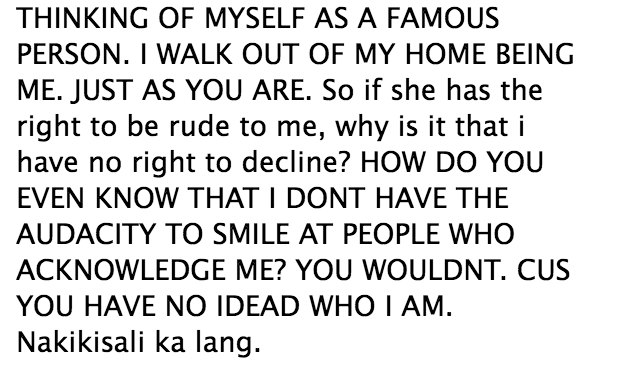 Since the end of her last soap, The Greatest Love, Andi has been spending time in the beach, raising her daughter, Ellie, and going out with her boyfriend Emilio Arambulo.

Andi also made headlines a few months back when she got into a custody battle with Jake Ejercito over their daughter Ellie. The issue has since been ironed out. – Rappler.com