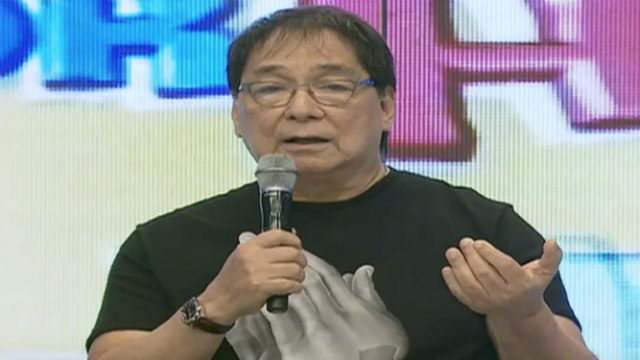 MANILA, Philippines – A day after he drew flak from people online regarding his statement on depression that it was all made up, Eat Bulaga host Joey de Leon issued an apology on television.

(My friends, yesterday, we were all joking, having fun and we were able to talk to a pastor and a teacher, who is his wife. We talked about different topics and one of them was about depression. Because of the teasing that has been happening, yours truly took the topic very lightly.)

(Until I mentioned that it was all made up by people. That’s what  I believed – that stress and depression were of the same track. Don’t expect that I know everything in this world. As long as we continue to live, we also learn new things. I made a mistake.)

According to the TV host, upon arriving at home, his wife Eileen and his children lectured him on what he said on television. He also said that when Eileen mentioned that they have relatives suffering from the condition, he felt guilty and ashamed.

He also apologized to Maine Mendoza, who spoke up that depression was not an issue to joke about.

(I ask for your forgiveness. Last night, I also called Maine. I apologized to Maine because she was the one who mentioned about depression. So I can now breathe a sigh of relief because I was not able to sleep properly until this opportunity came.)

Joey said that if there’s one thing from his mistake people should remember is that it could lead to more serious discussions on the matter.

(If there’s one good thing that came out of this, is this would open the gate to discuss this issue more. And about depression, I was not aware that it was that wide and deep. I just thought it was stress and all, again, I ask for your forgiveness, to those who got hurt and angry. I’m sorry and as the saying goes  if the root is bitter or knowledge or education is bitter, the fruit is of it is sweet.)

Joey also said sorry to Ryan Agoncillo, who on Instagram Friday, October 6 spoke about the matter. Ryan said that in one way or another, it was also good that the situation happened to enlighten people about the topic.

Ryan added that the issue was not just about the mistake, but those who are quiet and affected by the stigma.

“Let me just encourage everyone from this point on noh, what happened yesterday was a mistake, and I think everyone admits it and ang problema hindi doon sa maiingay (the problem is not those who are reacting). They’re the quiet ones who are affected. So as you react to today, from this point on, as we react, let’s be honest, sana hindi sa galit manggaling yung reaction n’yo (let’s hope its’s not from anger that yuo’re reaction is coming from). Sana sa pagmamahal and yung nangyari, may dahilan (I hope its from love and what happened, there’s a reason for it) . So to the quiet ones out there, noh, nandito ang mga Dabarkads, para sa inyo, lagi iyan (the Dabarkads is always here for you, always.)” – Rappler.com