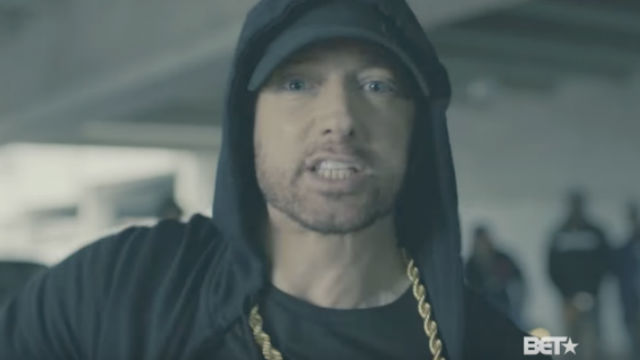 MIAMI, USA – Eminem savaged Donald Trump as a racist and warned fans not to support the US president as the rap superstar appeared at the BET Hip Hop Awards broadcast Tuesday, October 10.

Eminem, the top-selling rapper of all time, made a rare and unexpected appearance in a recorded video aired during hip-hop’s premier awards show.

With a hoodie over his head and visceral anger in his voice, Eminem rapped freestyle from inside a parking ramp as an entourage stood guard behind him.

Eminem in his profanity-laden salvo decried Trump as both incompetent and prejudiced, rapping: “Racism’s the only thing he’s fantastic for.”

“We better give Obama props / ‘Cause what we got in office now’s a kamikaze / That’ll probably cause a nuclear holocaust,” Eminem said in a likely reference to Trump’s Twitter war of words with North Korean strongman Kim Jong-Un.

Eminem, who is by far the most successful white rapper, ends the video by demanding that his fans forswear Trump.

“Any fan of mine who’s a supporter of his – I’m drawing a line in the sand / You’re either for or against,” he said.

Eminem pledged solidarity with former San Francisco 49ers quarterback Colin Kaepernick, whose protests against racism during the US national anthem have triggered an intensifying row as Trump demands that athletes stand for the flag.

Trump “gets an enormous reaction when he attacks the NFL / So we focus on that instead of talking Puerto Rico or gun control for Nevada,” Eminem rapped, referring to the devastation of Hurricane Maria and the massacre at a concert in Las Vegas.

“All these horrible tragedies and he’s bored and would rather cause a Twitter storm with the Packers,” Eminem quipped.

“Now if you’re a black athlete you’re a spoiled little brat for trying to use your platform or stature to try to give those a voice who don’t have one,” he said.

Eminem, whose music is rarely overtly political, made the intervention a year after releasing his last song – also a denunciation of Trump recorded in the run-up to the election.

Eminem’s longtime producer Denaun Porter recently said that the 44-year-old rapper had completed an album, which would be his first since 2013.

BET, which stands for Black Entertainment Television, broadcast the awards 4 days after the gala took place in Miami.

Cardi B, who has quickly become one of the top women in hip-hop, ruled the night with 5 awards including best single or her debut track “Bodak Yellow.”

Kendrick Lamar, who triumphed at the latest MTV Video Music Awards, came in a close second with  4 trophies. – Rappler.com