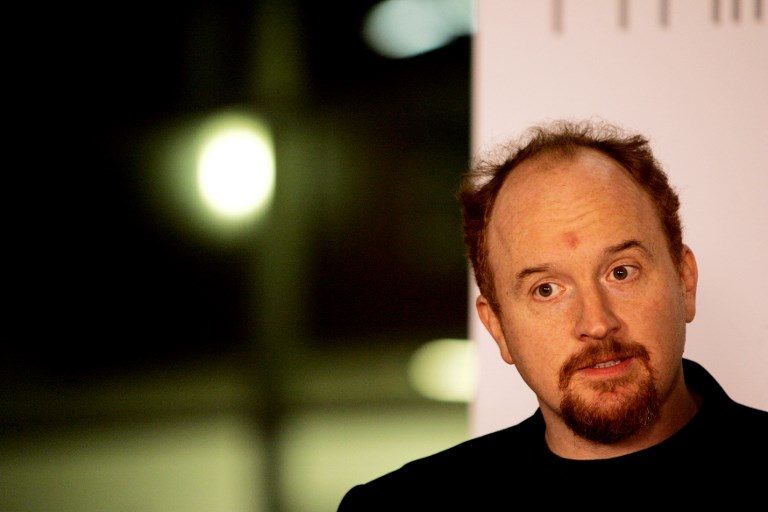 Facebook Twitter Copy URL
Copied
'These stories are true,' says the writer, actor, and stand-up comedian in a statement

Father of two Louis C.K. was dumped by Netflix, his publicist, the television networks FX and HBO, and his upcoming movie, which had showcased a relationship between an aging filmmaker and a teenage girl, was scrapped.

An extraordinary statement of guilt from the 50-year-old did nothing to limit the fallout as the entertainment industry grapples with scandals that have already sunk the careers of Hollywood mogul Harvey Weinstein and Oscar-winner Kevin Spacey.

“At the time, I said to myself that what I did was okay because I never showed a woman my dick without asking first, which is also true,” he said.

“But what I learned later in life, too late, is that when you have power over another person, asking them to look at your dick isn’t a question. It’s a predicament for them. The power I had over these women is that they admired me.

“And I wielded that power irresponsibly,” he said.

While the comedian did not explicitly apologize, he said in his statement: “I have been remorseful of my actions.”

It was the most frank public admission of guilt from an accused man since sexual harassment and abuse scandal broke in early October, disgracing not just Weinstein and Spacey but and implicating directors such as James Toback and 1980s action star Steven Seagal.

Louis C.K. said there was “nothing about this that I forgive myself for” and claimed he could “hardly wrap my head around the scope of hurt I brought” on the women and colleagues with whom he has worked, now impacted by the scandal.

But it was not enough to stop his career spinning out of control. The distributor of his new movie “I Love You, Daddy” said it would not go ahead with its release and HBO dropped him from a comedy benefit concert due to air next week, US media reported.

Netflix announced that it was abandoning a second stand-up special featuring the star in the wake of what it called his “unprofessional and inappropriate behavior with female colleagues.” The first had debuted in April.

FX, which has produced 5 shows with the star, announced that it was cutting all ties with the comedian and his production company.

“Now is not the time for him to make television shows. Now is the time for him to honestly address the women who have come forth to speak about their painful experiences, a process which he began today with his public statement,” it said. – Rappler.com